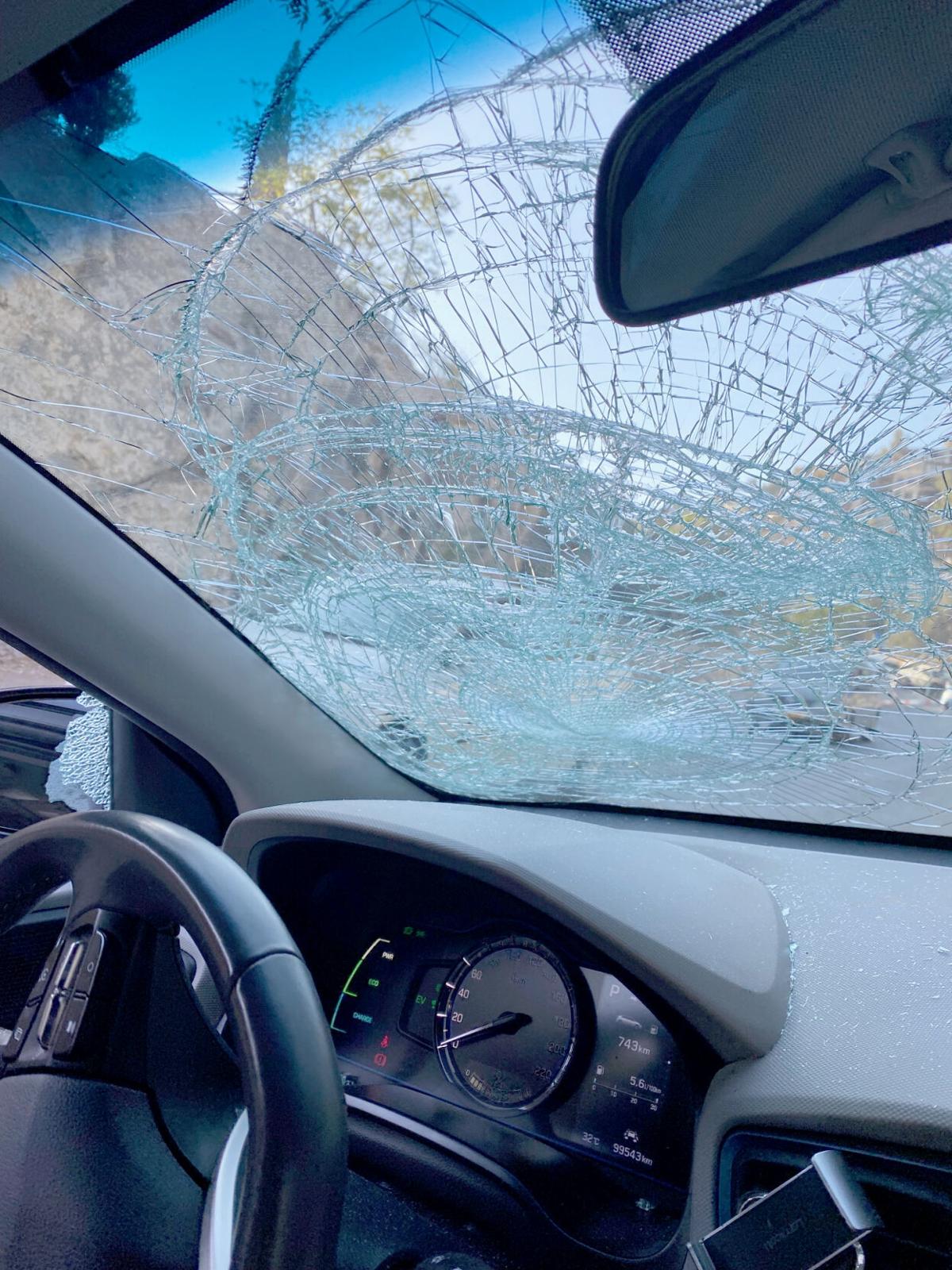 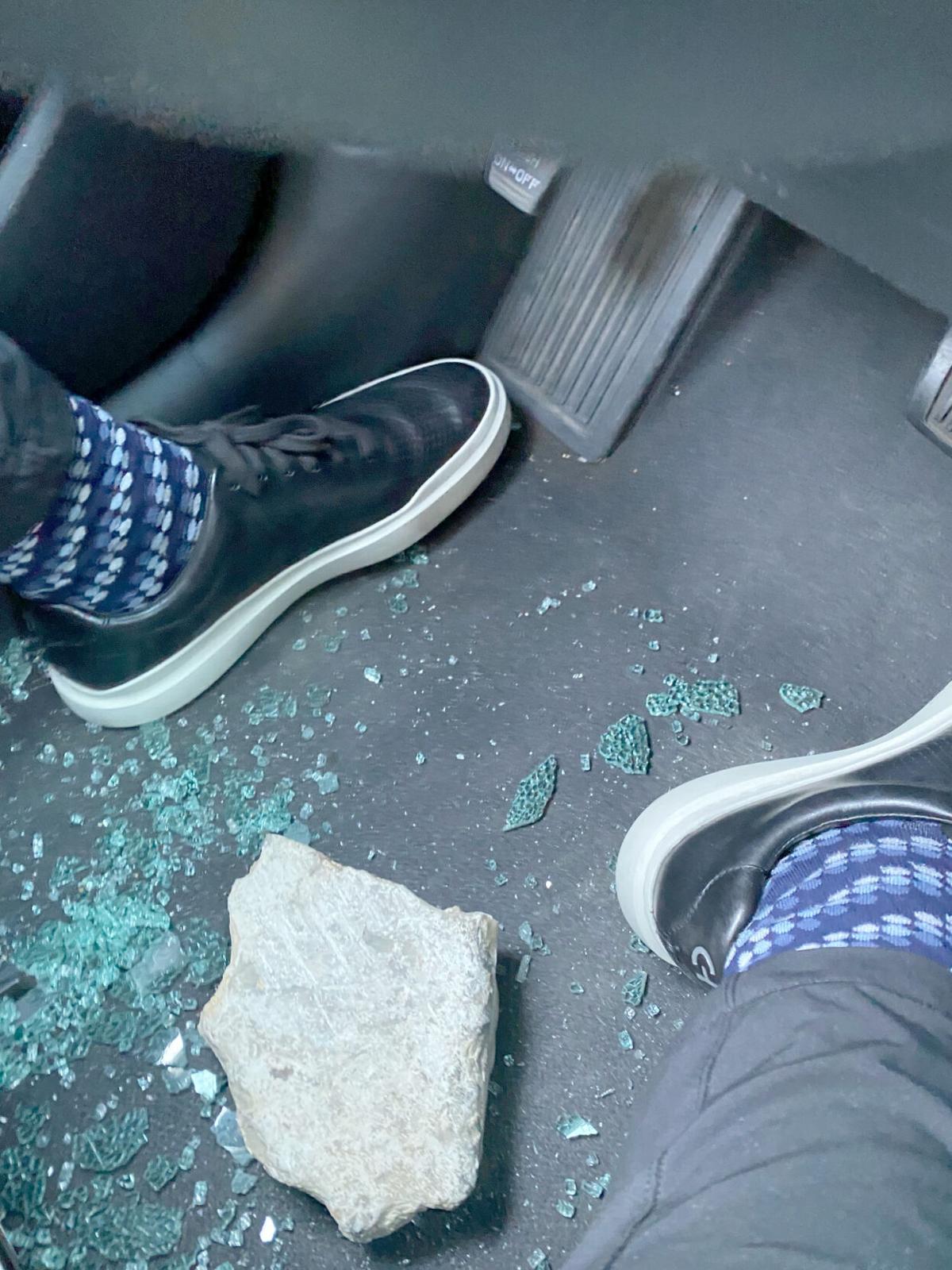 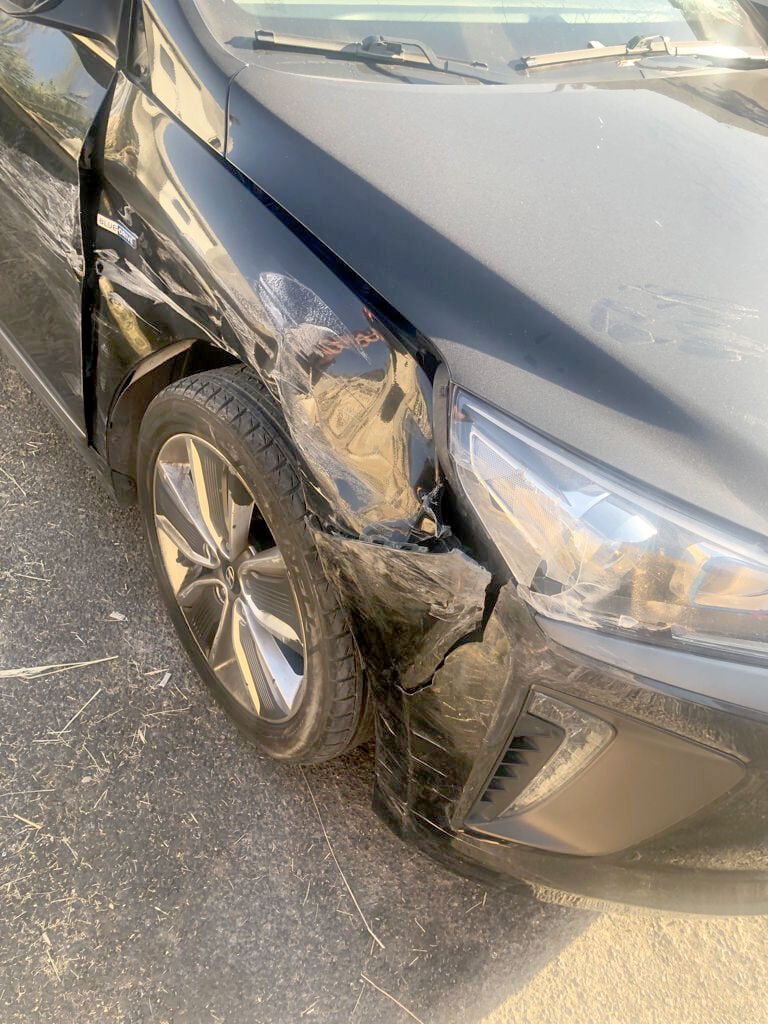 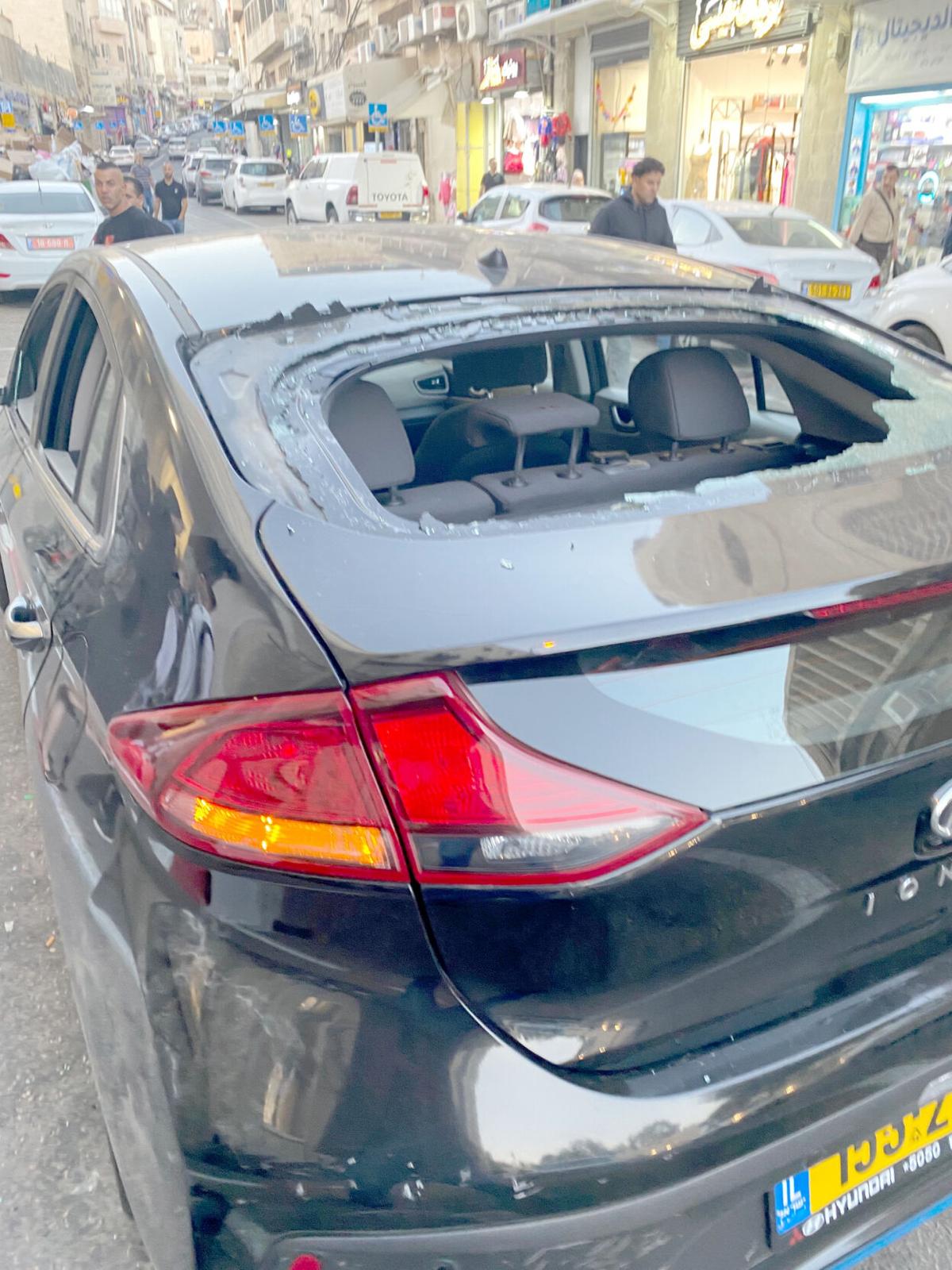 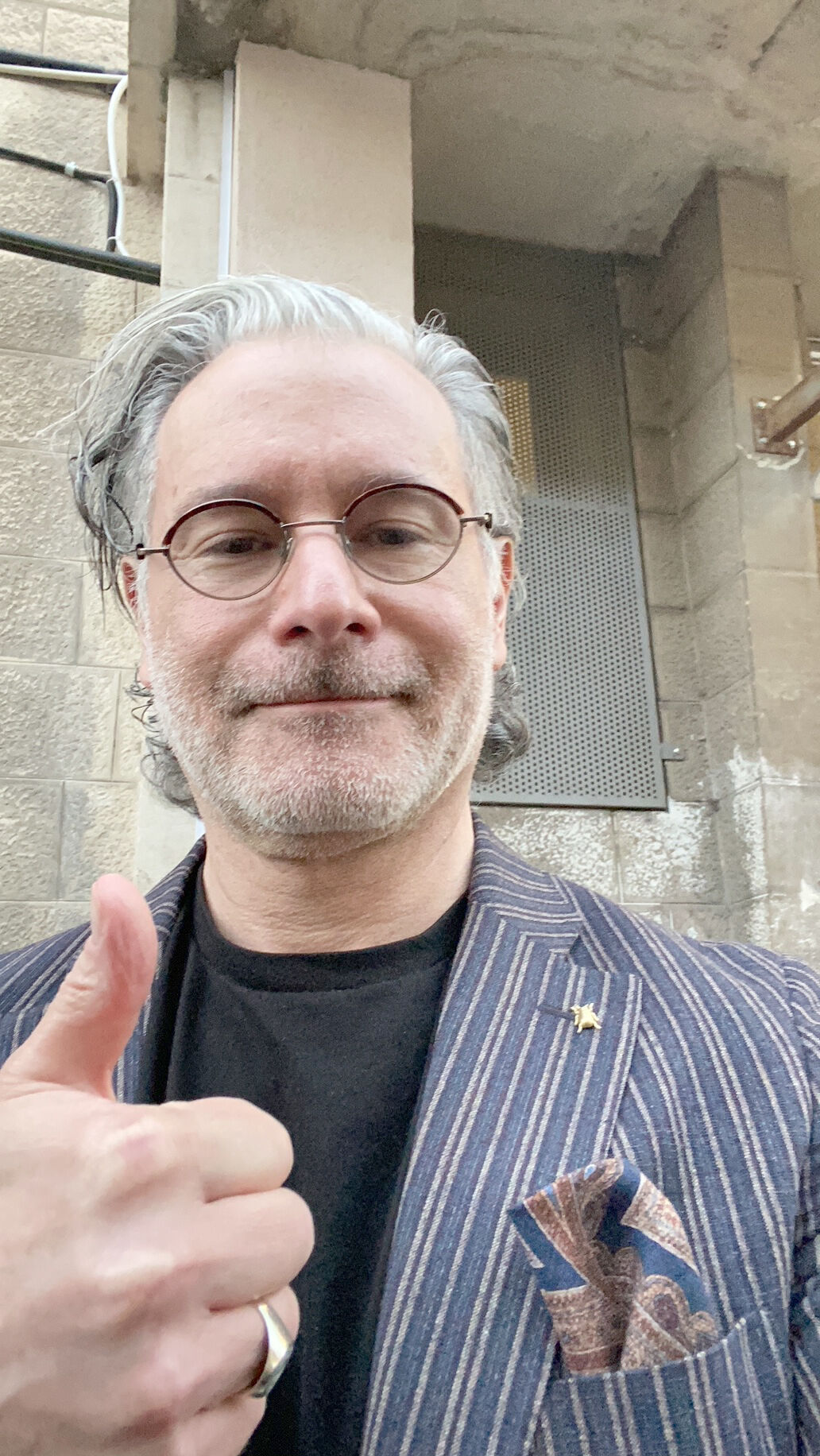 Andrew Zashin gives the thumbs up sign that he and his family are safe.

In a car on our way from Jerusalem to Zichron Yaacov, celebrating the nuptials of my son, Elan, and my daughter-in-law, Chloe, Waze took us through East Jerusalem to avoid traffic. So depending on your point of view, while we didn’t leave Israel, it may have felt like we did.

Why did Waze suggest this route without a warning? I do not know. Waze is good at warning you about roadkill ahead, but about becoming roadkill yourself, it is not so good.

But hey, what could go wrong with Jews driving a car with an Israeli license plate through East Jerusalem in daylight? After all, the world wants the West Bank to literally become a neighboring state with East Jerusalem as its capital, the two-state solution. Peaceful co-existence. How could this not work? Sitting thousands of miles away, it sounds like a no-brainer.

I am generally a politically liberal person. For years, I too thought this was a great idea. I still think it is a great idea. But figuratively, and now literally, in the words of political commentator Irving Kristol, I have been “mugged by reality.” How exactly would, how exactly can, a two-state solution work?

As I have learned professionally in my career as a lawyer, for any negotiation to work, it takes both sides to get to yes. From Israel’s creation as a modern nation state in 1948, it has tried to reach a peace, a compromise, with its Palestinian neighbors.

Since Israel survived its War of Independence in 1948 it has literally chased it neighboring Arab states and local Arab neighbors for compromises and peace deals until the present day. Yet, as the historian, statesman and former Labor Party Foreign Minister Abba Eban said, “The Palestinians never miss an opportunity to miss an opportunity.” Sadly, when the locals sing and chant, “from the river to the sea,“ why should any Israeli, or Jew anywhere, not believe what they are saying? That there is no space in the land of Israel for Jews. The fact is, Arab states instigated a war in 1967 and again in 1973 (the “Yom Kippur War”) and they lost. Israel won. Wars have consequences.

At a granular level, why would the Palestinian Muslim people living in East Jerusalem not have hard feelings toward Israel today? And why should they not also have hard feelings toward Jordan and the other Arab states that abandoned them and left them to languish after having been completely trounced by the victim of another genocidal war of annihilation in 1967 by tiny Israel.

And why should they not be angry at the world for standing idly by while they have been used as pawns in a wider geopolitical game while their situation has not improved and their leadership has pilfered the aid sent to benefit them from donor governments?

Palestinian grievances are real, however, they are also fed an unending diet of Jew-hate and absurd anti-Zionism. The ingestion of which manifests itself in attacks against innocents like my family. Western idealism seems resistant to reality, suspiciously so, at least with respect to Jews and Israel. In this case, I respectfully argue that political idealism must take a backseat to pragmatism because human right No. 1 is on the line: the right to live. What happened to us should illuminate this larger discussion.

Once in East Jerusalem Oct. 11, rock throwers greeted us. The car we drove turned into the focus of a riot. The rioters turned into a swarm that closed in on us. The episode was no less than a full-blown terror attack against me, my son, my daughter-in-law and my mother. Apparently, according to their logic, we were provocative, having driven into their neighborhood. And for that we deserved death. That was exactly the plan.

I was hit with a brick. In the head. I was hit with another one in the arm. My son and mother were hit on their heads with bricks and stones. All of us were hit with objects and covered in glass. Our car was trashed. We were lucky to get out alive. I found the event surreal. It was scary. My family was upset, to put it mildly.

This is still difficult to discuss and to write about. My worst fears about some of our neighbors over there, that I truly suppressed, have been realized. I am searching for the right words to be honest and the best way to explain my experience. I am profoundly upset and sad.

Immediately after we survived and when we where safely in the hands of the border police, I could not get out to assess the damage to the car. Both because the police would not let me and because my door would not open. On the drive back to the police station in what was left of our car, escorted by the police, Jewish people on the road were aghast at what a sight we were. They asked us if we were OK, if they could do something for us, or shared words of kindness.

In contrast, the Arabs we passed pointed at us, laughed in high spirits with fists in the air, high-fived one another, mocked and jeered us. It was pathetic and sickening. So when people say this is “a problem of leadership on both sides” or try to find an equivalence between the sides, despite the various examples here and there, they are just wrong. This is a people problem.

An important point about the rock throwers: These rock throwers are not just innocent or somehow less murderous because they did not have guns. They are not frustrated kids, who, deprived of opportunities, were looking for an outlet. No.

I saw their faces. I saw the face of the man who stood at the hood of our car as he heaved a huge brick into the windshield at me and my son. This was not a game. This was murderous. These stone throwers were organized and had a plan.

Look at our windshield.

One more hit in the front and we were goners. If this was fun for them, or a warning, or a game, they would have hit the doors, slashed our tires, scrapped the paint, or broken our mirrors. None of that happened. What this mob did was focus on kill shots.

The back windshield was gone instantly. Blown out by a brick at point blank range. That brick flew between the heads of my mother and my daughter-in-law, hitting my mother in the head.

The first wave of stones were the biggest. They were the bricks often used in construction. Once the windows were gone, the small stones came. The small stones whizzed passed my head like bullets. They were sharp. They too were thrown with murderous intent. Make no mistake. It all happened fast. Then the crowd got thicker and it moved in around us, getting closer and closer.

Had it not been for some aggressive, evasive driving from my son, we would not have gotten out alive. That sounds like an exaggeration and it is strange to write, but I have no doubt it is true. And drive he did until we passed the first border patrol Jeep and reached safety.

The party was canceled.

Post script: The ringleader and some of the perpetrators were caught. I do not know more about their fate right now.

Elan and Chloe got a do-over on their party.

My mother and I flew back to Cleveland Oct. 14.

I am both sad and angry. But I am grateful to be able to share this story.

Andrew Zashin is a Pepper Pike resident who writes a monthly law column for the Cleveland Jewish News.