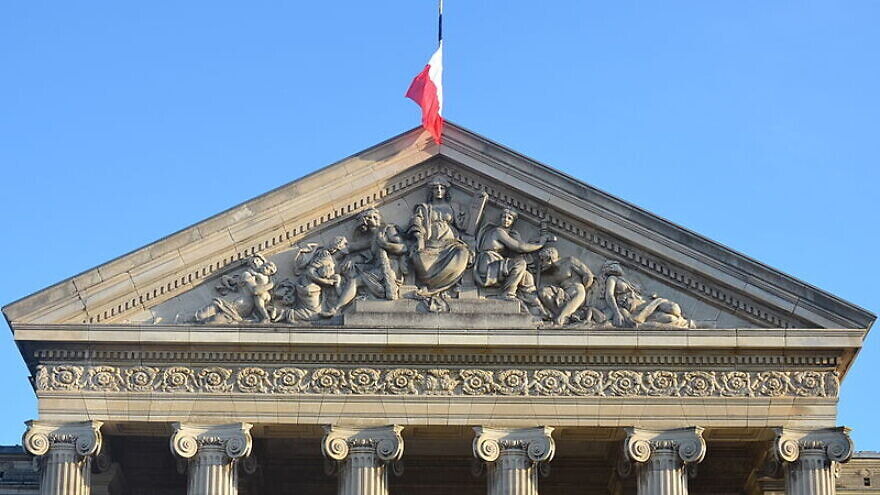 The exterior of the Palais de Justice in Paris, France.

Who is more effective in the fight against resurgent anti-Semitism: Facebook or the French judiciary?

I’m asking this particular question because of two separate developments over the last week that, when taken together, suggest that the social-media neophytes in the private sector are far better-equipped for the task of combating anti-Jewish agitation than the venerable legal system of a leading E.U. member state and world power.

Facebook’s CEO Mark Zuckerberg recently announced a 180-degree policy reversal: henceforth, the denial of the Holocaust is a lie that Facebook will no longer tolerate on its platform. In an interview two years ago, Zuckerberg ruled out a ban on Holocaust denial, arguing that the best way to fight “bad speech” was with “good speech.” Now, he is no longer so convinced. “I’ve struggled with the tension between standing for free expression and the harm caused by minimizing or denying the horror of the Holocaust,” he wrote in a blog post. “My own thinking has evolved as I’ve seen data showing an increase in anti-Semitic violence, as have our wider policies on hate speech.”

There were other factors in Zuckerberg’s evolution, not least the concerns voiced by advertisers about hate speech and fake news more broadly on Facebook. But the fact remains that Zuckerberg’s view on this matter has evolved in recognition of changing circumstances, which is more than can be said for state prosecutors and judges in France.

Two days before Zuckerberg declared his shift on Holocaust denial, there was a creepy reminder of the danger it poses on full display along the celebrated rue de Rivoli in Paris. The columns of one of the historic buildings lining the street had been vandalized with giant swastikas in red paint, 20 of them altogether. France’s interior minister and the mayor of Paris were among the politicians who rushed to condemn the outrage, noting that it was yet another sign of menacing anti-Semitism that the country’s political establishment has pledged to stamp out.

The alleged vandal – a 31-year-old man from the Republic of Georgia – was captured by police on Sunday. The following day, he was sent for a psychiatric evaluation, which determined that he was not suffering from mental illness, and from there back into the custody of the police.

Last week, the Paris prosecutor’s office announced that the man was being charged with causing damage to private property. The greater crime – an offense aggravated by racial or religious hatred – was absent from the charge sheet. Why? Because, as the newspaper Le Figaro explained, the prosecutor reasoned that since the vandalized building did not have any historic Jewish associations and was not owned by Jews, the act of spraying the main symbol of Nazism on its exterior could not be construed as a hate crime targeting the Jewish community.

One of the lawyers for LICRA, a civic organization that counters anti-Semitism and racism, expressed herself “stupefied” by the prosecutors’ decision, a reaction shared by CRIF, the body representing French Jews, along with the French Jewish student association, UEJF. In the sense that judicial officials in a country that has been plagued by anti-Semitic violence for nearly 20 years fail to connect the swastika with hatred directed at Jews, it is indeed stupefying – and frankly insulting. But perhaps because we are talking about France, it isn’t necessarily surprising.

After all, the Islamist anti-Semite who cruelly murdered Sarah Halimi, a 65-year-old Jewish woman, in her Paris apartment in April 2017 has been excused from a criminal trial on the grounds that his intake of cannabis on the night of the killing rendered him delirious, and therefore, not criminally responsible.

Of course, the Halimi case is far more serious than the swastika vandalism, as an elderly woman’s life was savagely taken, but both examples speak to a pattern. French Jews are targeted, attacked and vilified, French politicians jostle to be the first to condemn the latest outrage, but when the offenders come before the courts, the anti-Semitic hatred that motivated their acts is treated as an irrelevant distraction by the judiciary.

And yet, at the same time, French Jews have made visible progress this year in the fight against anti-Semitism. For more than a decade, an ostensible comedian named Dieudonne M’bala M’bala established himself as France’s most obnoxious and high-profile anti-Semite, mocking the Holocaust in order to deny it in his live shows and broadcasts. But back in June, YouTube closed down Dieudonne’s channel, cutting him off from 400,000 followers overnight. Facebook and the Facebook-owned Instagram followed suit in August, pointing to the “dehumanizing terms about Jews” employed by Dieudonne in his posts. Moreover, similar penalties have been applied by

social-media companies to lesser-known anti-Semites, including Dieudonne’s closest comrade, a two-bit thug named Alain Soral who fancies himself as a nationalist intellectual.

These blows against Dieudonne and Soral were particularly satisfying, given their lengthy records of appearing before French courts for Holocaust-denial offenses and leaving with just a small fine or a suspended sentence. It cannot escape notice that again the decisive moves here came from social-media companies who are relatively new to the challenges involved with identifying and countering anti-Semitism. Meanwhile, the French judiciary continues to gaze in the opposite direction.

These developments are not restricted to France alone. In other countries, including this one, economic and political pressures mean that the social-media behemoths are no longer able to disown the content they distribute; instead, they must increasingly police it. But similar pressure has failed to move the judiciary in France, which treats each instance of anti-Semitism as if it were unrelated to previous ones – a convenient approach if you want to carry on denying the crisis that is right in front of you.

The battle against anti-Semitism cannot be waged on social media alone, especially in Europe. Jewish communities need recourse to the courts, and the courts are the acid test of how committed a country is to protecting its minority communities and punishing those who attack them. In this respect, France is sorely lacking – and those who argue that this defect will always be there may, sadly, be right.

Ben Cohen is a New York City-based journalist and author who writes a weekly column on Jewish and international affairs for JNS. Top read more of Cohen’s columns, visit cjn.org/cohen.