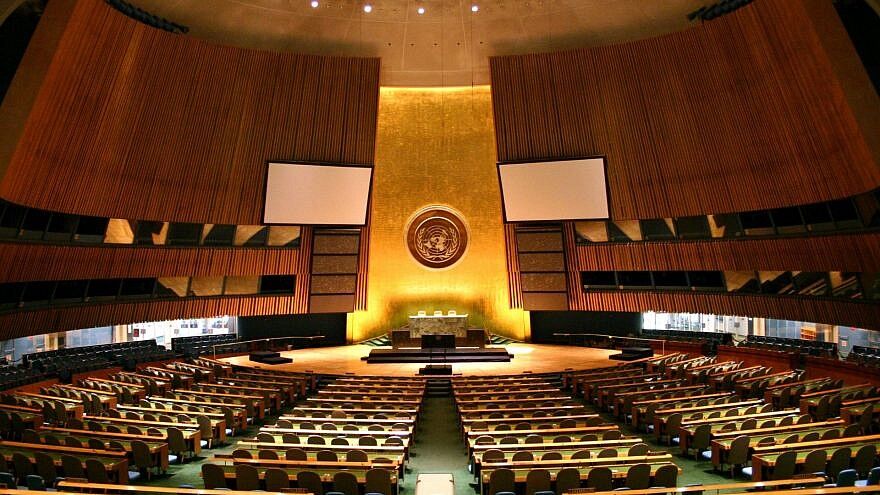 A view of the U.N. General Assembly hall.

Some of you will probably be familiar with a charming German movie, “Goodbye, Lenin,” the story of which concerns a woman in Communist-ruled East Germany who falls into a coma and wakes up a few months later in a unified, democratic Federal Republic of Germany. To avoid another shock to her delicate nervous system, the woman’s two children carefully preserve her old living environment, so as to fool her into believing that her Socialist fatherland is still intact and that the outside world is exactly the same as when she temporarily left it.

The United Nations lives in a similar alternative universe. Since its creation in 1945, a good part of its internal life has revolved around an endless cycle of committee meetings, work plans and resolutions that take little account of how the outside world is changing. On certain occasions, its deliberations can seem so out of touch with reality that you wonder whether the directors of “Goodbye, Lenin” are lurking somewhere in the background.

Last week (a momentous, exhausting week, as we all recall) was also a busy one at the world body. The U.N. General Assembly’s Fourth Committee, an entity that remains concerned with “decolonization” in an age when territorial empires are a thing of the past, passed seven resolutions, all of which focused on Israel and the Palestinians and all of which condemned Israel in resolute terms.

One resolution expressed dismay that the descendants of the Palestinians who fled during Israel’s 1947-48 War of Independence, whom the United Nations still classifies as “refugees,” were still awaiting repatriation. Another resolution referred to the Temple Mount in Jerusalem as al-Haram al-Sharif, its Islamic nomenclature. Yet another resolution decried Israel’s actions in the “occupied Syrian Golan,” as if the apocalyptic civil war in neighboring Syria, in which hundreds of thousands of Palestinians were murdered, tortured and ethnically cleansed, had never happened.

The sense of a time warp is magnified by the list of member states who vote in favor of these resolutions, which is the vast majority of those present. The roster of nations that lined up last week to tar Israel as a rogue state included the United Arab Emirates, Bahrain and Sudan –the three Arab Gulf states that signed normalization agreements with Israel over the last few months, marking the most profound change in the dynamics of the Middle East situation in decades. The spirit of the Abraham Accords was rudely locked out of the Fourth Committee’s deliberations.

A foreign-policy realist can counter that the Fourth Committee’s deliberations mean very little, irrespective of the size of the majorities behind its various anti-Israel resolutions. Only at the United Nations is the Palestinian question still regarded as the key to regional, if not global, peace, when that view has become an anachronism everywhere else.

It is the only international body to dedicate a vast bureaucracy to the Palestinians exclusively, notable mainly for UNRWA, the Palestinian-only refugee agency, but also the General Assembly’s own “Committee on the Exercise of the Inalienable Rights of the Palestinian People,” a cauldron of anti-Zionism, and the Geneva-based Human Rights Council, which reserves a permanent spot on its agenda (“Item 7”) to lacerate Israel for its alleged violations. The United Nations is also the only global body to have officially denounced Zionism, the national liberation movement of the Jewish people as a form of racism. Old habits die hard, then – but in this case, the harder they persist, the weaker their impact is upon the wider world.

So it might be tempting to leave it there, and say – as some commentators have already said – that the United Nations is a convenient location for those Arab states that have made peace with Israel to make a symbolic stand for the Palestinians. In other words, that all this is a useful, if irritating, charade that does no material harm to Israel.

I would argue differently. The difference between a cold peace and a warm peace is whether the ideas and prejudices that informed the original conflict are sustained after an agreement is signed by governments. The warm peace between Israel and the Arab states that is beginning to emerge necessitates the wholesale abandonment of the ideology of anti-Zionism that stained Arab discourse about the Jewish state for more than a century.

Where better to demonstrate that transformation than at the very body that is stuck in a time warp: the United Nations?

Richard Schifter, a much-respected U.S. diplomat and Jewish leader who recently passed away, once observed that the anti-Israel resolutions at the United Nations could only be neutralized if foreign ministries explicitly instructed their delegations to vote against them. Until that happens, Schifter argued, the ambassadors in New York would not switch their votes, regardless of their personal feelings on the subject. And indeed, that is why numerous other countries that retain diplomatic relations with Israel will nonetheless either vote for or abstain on these heinous resolutions.

If the Middle East is really to enter an era distinguished by its “good feelings,” then the rest of the world must play its part. Ending the political warfare waged against Israel from within the United Nations is a major element of that contribution, but members will not step up without a positive signal from those Arab states now at peace with Israel. The next time the Fourth Committee or any other U.N. body meets for its ritual denunciation of Israel, let us work for the unexpected outcome.

Ben Cohen is a New York City-based journalist and author who writes a weekly column on Jewish and international affairs for JNS. Top read more of Cohen’s columns, visit cjn.org/cohen.