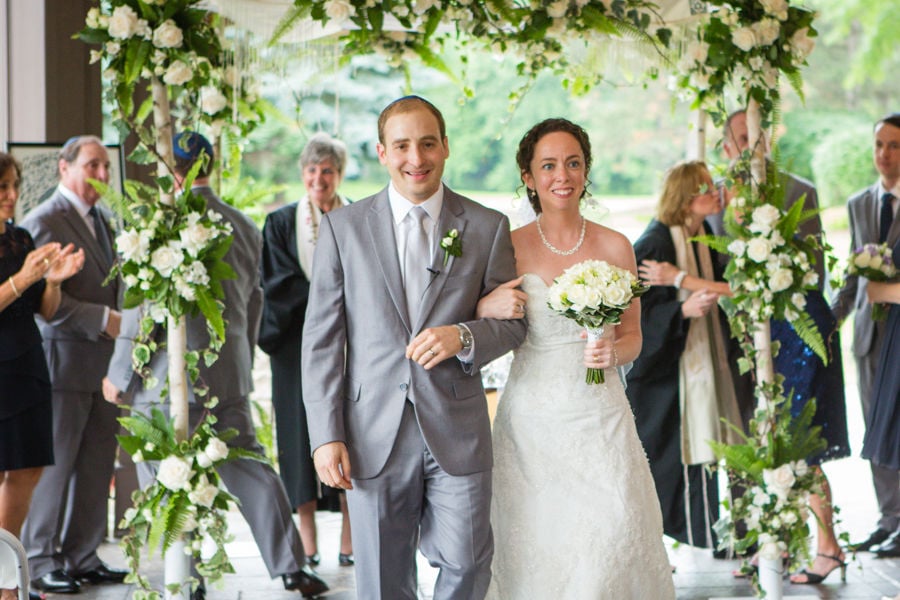 David and Amy Mayers of Shaker Heights after being married by Rabbi Rosette Barron Haim, rear, of The Temple-Tifereth Israel last June at Mayfield Sand Ridge Club in South Euclid. 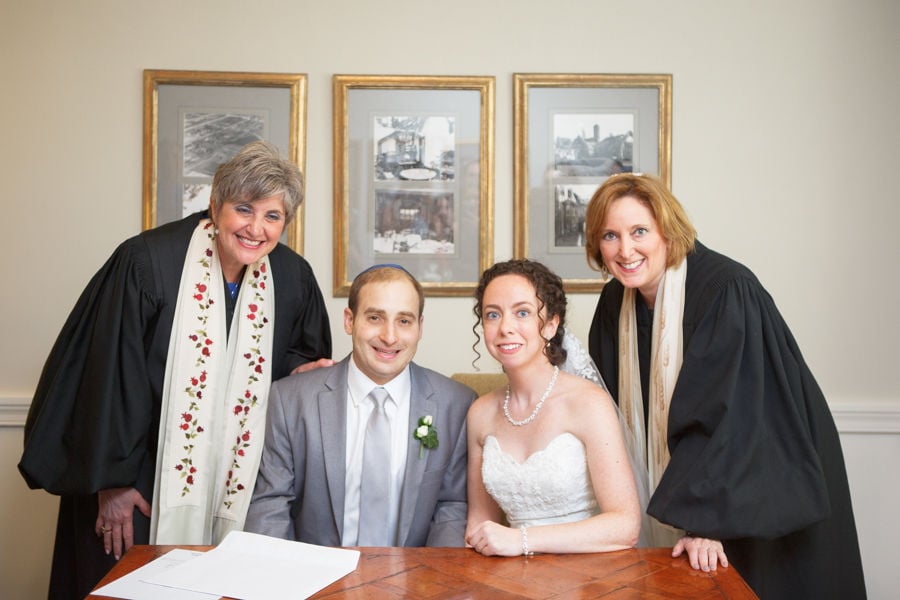 David and Amy Mayers with Rabbi Rosette Barron Haim, left, and Cantor Kathryn Wolfe Sebo, both of The Temple-Tifereth Israel, who combined to officiate their wedding. 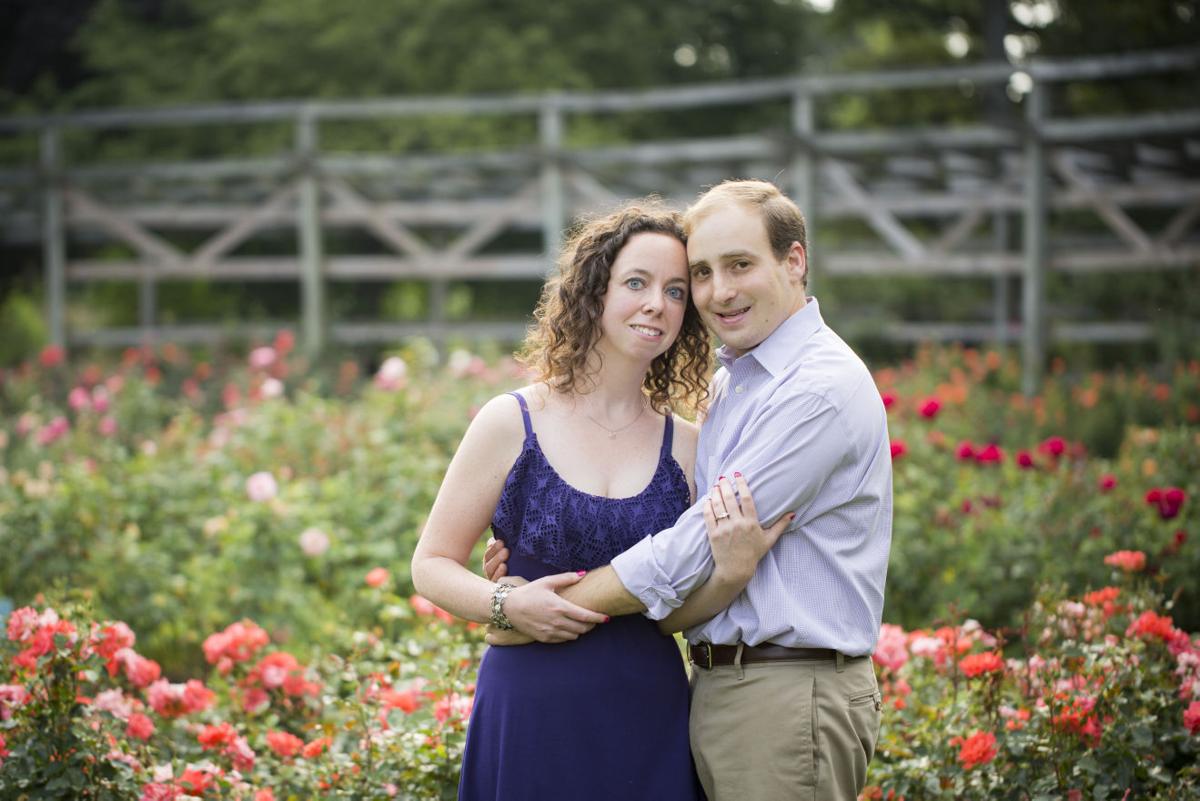 Amy and David Mayers embrace after David proposed to her in the Columbus Park of Roses in August 2014. 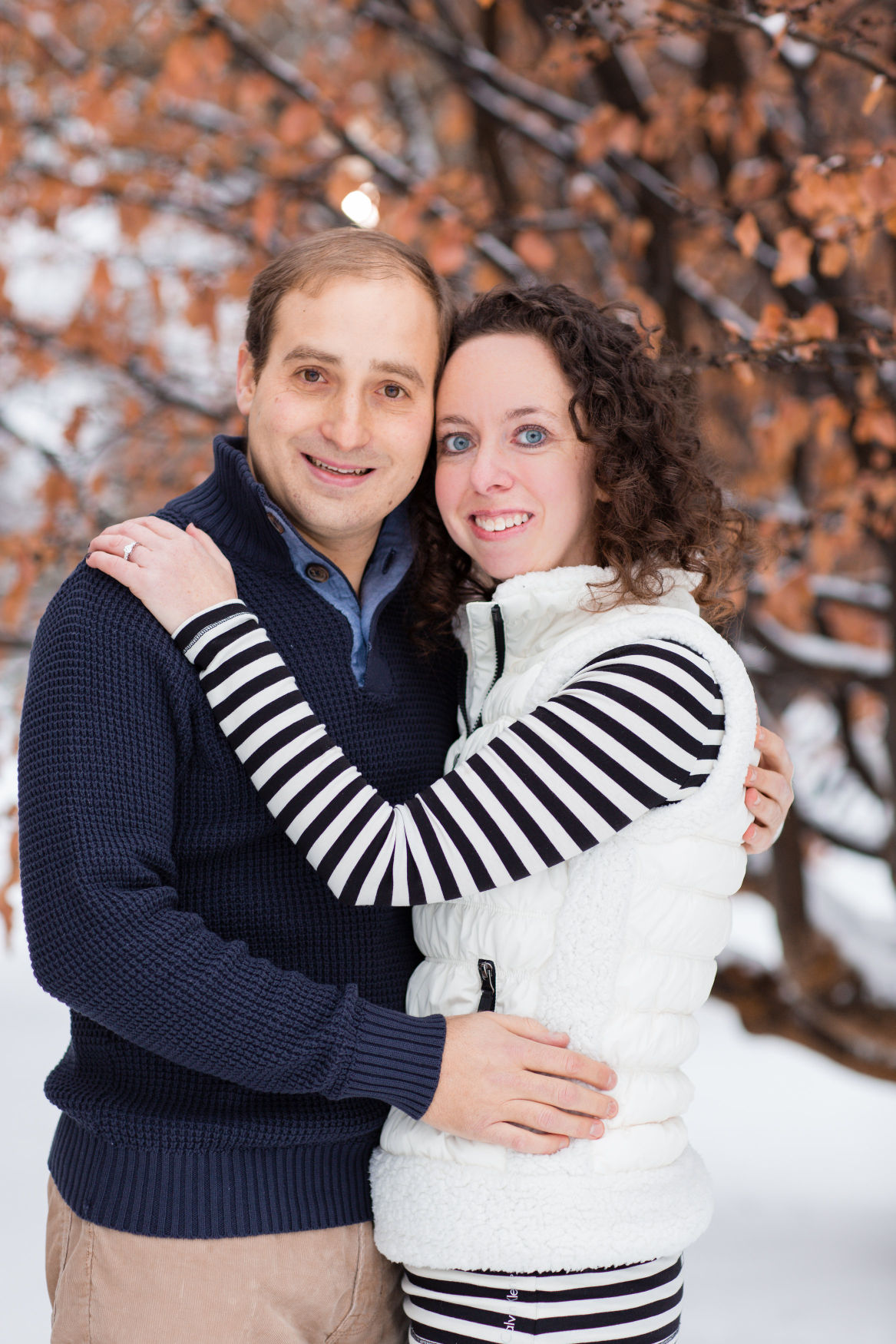 David and Amy Mayers pose for an engagement photo at Schiller Park in German Village in Columbus.

Amy and David Mayers relax in their Shaker Heights home with personalized pillows that were given to them in honor of their mutual love of ice cream.

David and Amy Mayers of Shaker Heights after being married by Rabbi Rosette Barron Haim, rear, of The Temple-Tifereth Israel last June at Mayfield Sand Ridge Club in South Euclid.

David and Amy Mayers with Rabbi Rosette Barron Haim, left, and Cantor Kathryn Wolfe Sebo, both of The Temple-Tifereth Israel, who combined to officiate their wedding.

Amy and David Mayers embrace after David proposed to her in the Columbus Park of Roses in August 2014.

David and Amy Mayers pose for an engagement photo at Schiller Park in German Village in Columbus.

Amy and David Mayers relax in their Shaker Heights home with personalized pillows that were given to them in honor of their mutual love of ice cream.

Amy and David Mayers wanted to do something unique on their wedding night that all of their guests would enjoy and remember.

So for a late-night snack, they had mini sugar cones from Mitchell’s Ice Cream passed out to everyone on the dance floor.

“Ice cream is a big part of our relationship,” David said.

On their first date, after dinner at a sushi restaurant in Columbus – where both were living at the time – the couple went to Jeni’s Splendid Ice Creams for dessert.

Then on their second date in Cleveland, where both were visiting family, they enjoyed Mitchell’s Ice Cream at La Place in Beachwood, now one of their favorite hangouts.

“Mitchell’s is just our favorite ice cream,” Amy said as she and David cuddled on the sofa of their Shaker Heights home on a cold winter night. “We travel a lot – we always try to find the best ice cream in every city that we go to – and we still come back and really enjoy Mitchell’s the best.”

Amy and David, both 32, share the same favorite ice cream flavor: caramelized chocolate, one of three flavors of the mini cones that their wedding guests enjoyed; the others were s’mores and strawberry.

“People still bring up the ice cream,” Amy said. “We just thought it would be a fun idea to have ice cream passed out on the dance floor.”

The mini cones were a hit, Amy said.

Still getting settled in Cleveland

Amy and David have been living together in Greater Cleveland only since September, one month before they bought their home. David, the son of Ruth and Doug Mayers of Shaker Heights, is a Cleveland native who grew up in Shaker Heights as a member of The Temple-Tifereth Israel in Beachwood and Cleveland. Amy, daughter of Betty and Joe Schechter of Sun Lakes, Ariz., is a native of Cincinnati, where she grew up.

Since March, Amy has worked as a pharmacist at Marymount Hospital, a Cleveland Clinic hospital in Garfield Heights. She earned a doctorate of pharmacy from the University of Charleston in West Virginia and a bachelor’s degree in pharmaceutical sciences from The Ohio State University in Columbus.

David is an analyst in financial strategy at the corporate headquarters of Things Remembered, a gift retailer, in Highland Heights, where he has worked since September. He has an MBA in strategic management from the University of Denver and a bachelor’s degree in economics and finance from Washington University in St. Louis.

The couple met in April 2013 in Columbus, about a week after David started a job there with Huntington National Bank.

“I ran into a friend of mine from NFTY and BBYO at a corporate event, and he said, ‘Come across the street; there’s a Jewish Federation (of Columbus) event going on’ at another restaurant and bar,” David said.

“So I went over there, and that’s where I met Amy. She was the nicest person who talked to me and really held my ear that night.”

Amy and David had a brief conversation that initial meeting, just long enough to exchange phone numbers, and about a week later they had their first date.

“That’s when we really started connecting,” she said.

What attracted him to Amy? David didn’t hesitate.

“Her eyes, honestly,” he said, as Amy flashed a smile. “And she was the person who really opened up to me and welcomed me into another circle of friends and helped me meet new people in a new city.”

Amy, who had lived in Columbus since 2010, said she was attracted to David because “he’s such a positive and encouraging person, and we had a lot of the same goals in life.”

“Also listening to all the experiences that he’s had in life that got him to where he was, that was a little inspiring,” she added, straightening the collar on his shirt. “We like experiencing new things together.”

The engagement: In rose garden

While they were dating, Amy and David came to enjoy taking walks through the Columbus Park of Roses. He decided he would propose to her there.

“It’s quiet there, usually not very crowded, so that was always in my mind as the place where I would do it,” he said. “But I wanted her to be surprised, and keeping a secret from her is a bit of a challenge.”

Amy confirmed that it’s very difficult to keep anything from her.

“I am very detail-oriented, and I notice everything,” she said. “But this was a complete surprise.”

David enlisted the help of two friends, Wendy Young and Amy Tannenbaum, to assist him in his deceptive plan.

“Wendy convinced Amy (then Schechter) to go to the rose garden for a long walk because she was training for a marathon; that was the ruse that got her there,” he said. “Fortunately, the rose garden was in full bloom, and Amy was taken aback by how beautiful it was.”

David, who joined them for the walk, directed Amy to the proposal spot.

“I said, ‘Come take a look from this angle,’ and that’s when I turned her toward me and dropped to one knee,” he said. “Then Amy Tannenbaum, who’s a professional wedding photographer, came out of the bushes and started photographing us.”

And what did Amy say when David popped the question?

“Of course,” she said with a smile.

The wedding: ‘Evening of roses’

Amy and David were married June 14, 2015, at Mayfield Sand Ridge Club in South Euclid. It was planned for outdoors, on the grass tennis courts, but was moved to a covered veranda at the country club due to rain.

“We both share a love for tennis, so we thought that would have been great,” Amy said. “But in the end, it worked out well. It was beautiful. It was undercover, but still outside.”

The couple asked Rabbi Rosette Barron Haim, of The Temple-Tifereth Israel, to officiate.

“I have known David since pre-kindergarten,” Haim said. “I’m the rabbi who raised him. His parents and grandparents have been members of our temple for generations.”

She performed the marriage ceremony for his older brother, and performed his bar mitzvah as well as the bat mitzvah of his mother as an adult.

David said there was never any question that Haim would officiate his wedding, and Amy agreed.

“It was a new relationship for us, but I felt connected to her to the point of feeling like I had known her a lot longer than I actually had,” Amy said of Haim. “The ceremony was a lot more special having her there.”

“She’s a pharmacist and my husband (Marshall Barron) is a pharmacist, so I’ve always enjoyed talking to her about that,” Haim said.

Cantor Kathryn Wolfe Sebo, also of The Temple-Tifereth Israel, joined Haim in officiating the ceremony. David said a moment that stands out was seeing Amy walk down the aisle as Sebo sang “Erev Shel Shoshanim,” which translates to “evening of roses.”

“Amy was getting closer to me, and I started to cry,” he said. “Literally, I had to bite my lip so that I wouldn’t go to pieces right then and there. It was just the sound of (Sebo’s) voice and the visual of Amy coming toward me; it hit me that this was finally happening.”

Amy said the memory that resonates for her is “everyone saying how emotional the wedding was.”

The honeymoon: In Italy

A week after the wedding, the Mayerses traveled to Italy for a two-week honeymoon. When they returned, David had to go back to live and work in Columbus – although he drove to Cleveland on weekends to visit Amy – until he was able to find the job at Things Remembered two months later.

“We always knew we would end up here, I think,” he said, noting both wanted to be close to family. In addition to his parents, David has a brother and a sister in the Cleveland area, and Amy’s brother lives here.

Amy and David are not members of a synagogue, but they attend High Holy Days services and occasionally Shabbat services at The Temple-Tifereth Israel.

“In all likelihood I think we’ll become members of The Temple,” David said. “We want to become more involved in the Jewish community and meet new people around the city.”

Amy said she and David recently attended their first meeting of the Northeast Ohio Region of ORT America.

“We had a great life in Columbus, with great friends, and it was very difficult for us to leave Columbus,” she said. “But we’re ready to start making our lives here in Cleveland.”

Publisher’s note: Rabbi Rosette Barron Haim is a member of The Cleveland Jewish News Board of Directors.

The couple: Amy and David Mayers

What the bride wore: The wedding dress made by Alfred Angelo was "stunning," David said.

The bridal party: Total of eight, four on each side