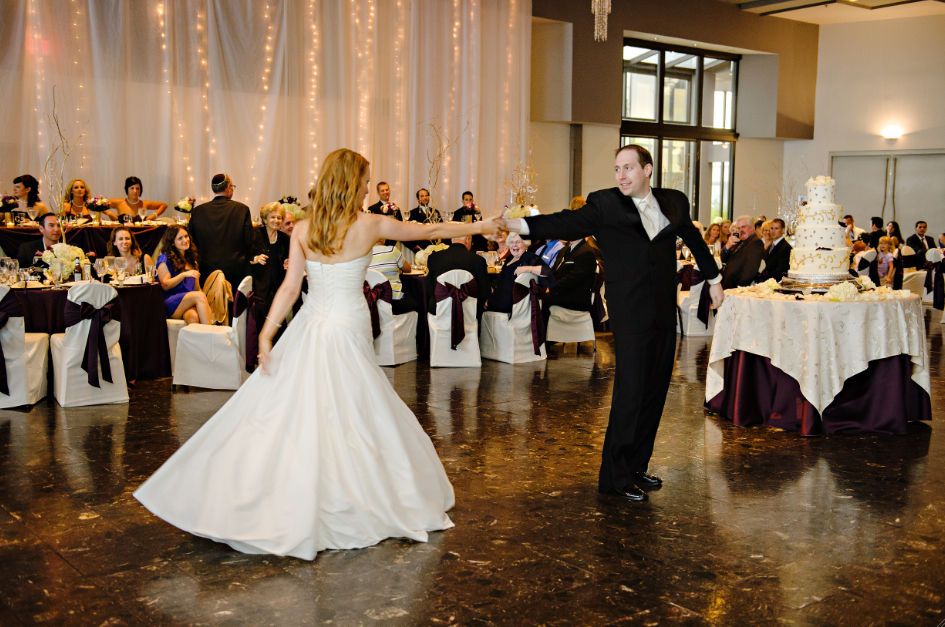 Stephanie and Mark Abramowitz kick off the reception. 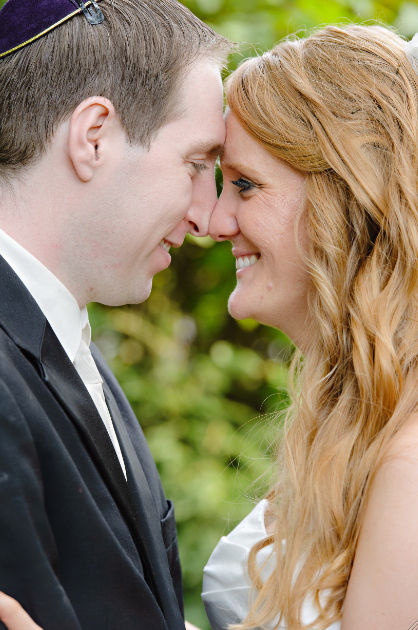 Mark and Stephanie Abramowitz nuzzle at their nuptials. 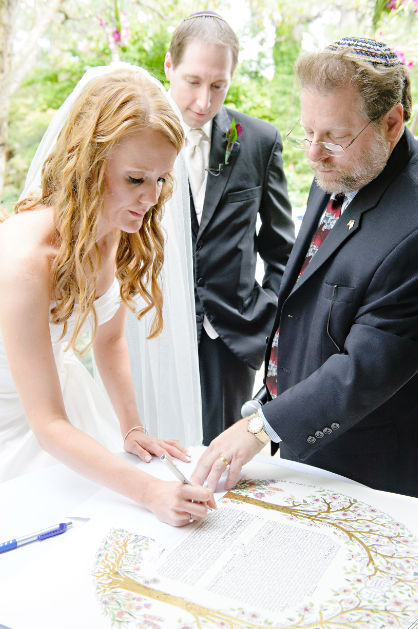 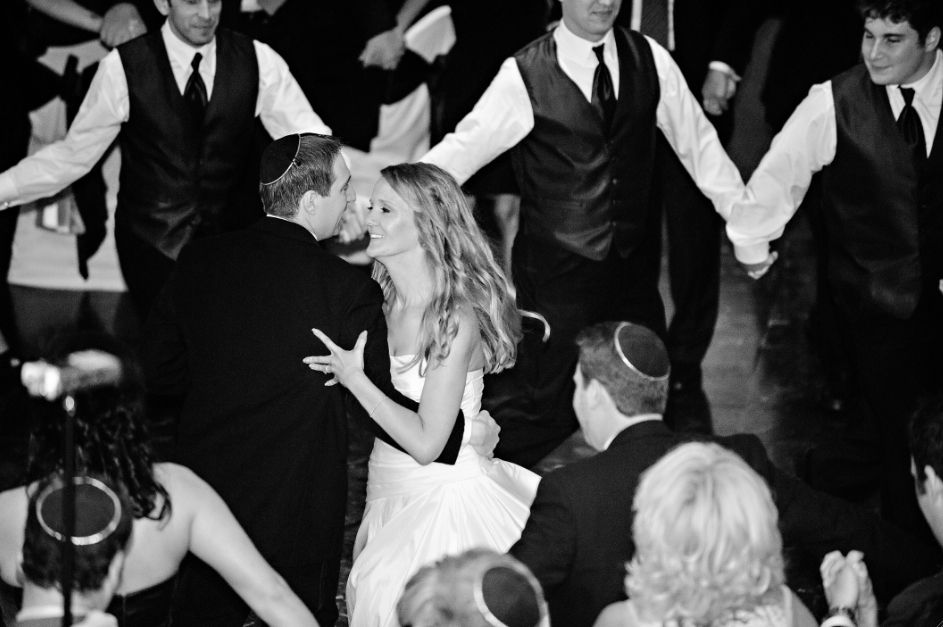 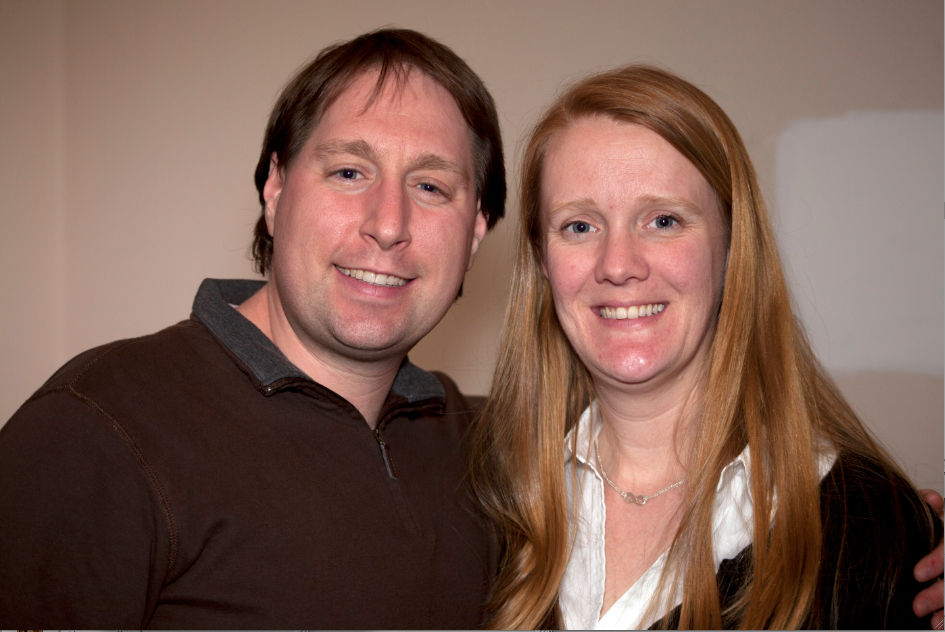 Stephanie and Mark Abramowitz kick off the reception.

Mark and Stephanie Abramowitz nuzzle at their nuptials.

Stephanie Pope and Mark Abramowitz fell in love before they met. Credit long distance telephone calls. Credit drive. Credit tolerance, warmth and humor. You could say that their nuptials were a template for their marriage.

In the summer of 2009, Stephanie was in medical school at Wright State University in Dayton when a mutual friend told her about Mark, who was attending the University of Toledo College of Law. The friend recommended the two meet because both are smart and both like to have fun. But, he warned, there were differences.

A little more than three years later, in a spirited blend of upbringing, faith and culture, Stephanie Pope, now 32, and Mark Abramowitz, a year younger, became Stephanie and Mark Abramowitz. Their wedding ceremony Sept. 2, 2012, during a torrid Labor Day weekend, drew hundreds to Executive Caterers at Landerhaven in Mayfield Heights.

“I think it was a very accurate and loving way to celebrate the ways we grew up, as Jewish, as Christian, as Canadian, as American, and to introduce the other side to the other side in the family we came from because we always felt we were the same person on the same wavelength even before we met,” Mark says in a joint interview at their home overlooking Lake Erie in Mentor–on-the-Lake, where they live with their children, Benjamin, 2, and Vivian, 3 months.

“It was a natural blending of our families,” Stephanie says. “We just needed a celebration to show that to everybody and to start a new life.”

Stephanie converted to Judaism to marry Mark. It wasn’t easy for her to give up the Christian traditions she grew up with, but it’s working out. The couple now attends Temple Israel Ner Tamid in Mayfield Heights.

Rabbi Matt Eisenberg of Temple Israel Ner Tamid was instrumental in the conversion and officiated at the wedding, a profound intermingling indeed.

“When somebody like that comes to join the Jewish people,” the rabbi says of Stephanie, “it makes the tapestry that much more colorful.”

Two sides of the same coin

Stephanie, who goes by Stephanie Pope as senior instructor in the division of child and adolescent psychiatry, University Hospitals Case Medical Center in Cleveland, was raised Lutheran in a big, religious family in the Columbus suburb of Upper Arlington. Mark, a malpractice lawyer with the DiCello Law Firm in Mentor, was raised Conservative, like his two brothers, in Toronto.

Stereotype has it that malpractice lawyers and doctors go together like oil and water. Not true in the Abramowitz household.

Occasionally, when they go out to dinner with friends of Stephanie’s who are meeting Mark for the first time, those friends can be guarded, Mark admits.

But when he tells them Ohio has done away with frivolous malpractice suits and “they start to hear the cases that we take and the stories of patient care, they soften up,” he says. “They at least start to understand that I am trying to help people.

“People have asked, as a doctor and a lawyer we must have some very interesting conversations, and yes, we do,” says Mark, who calls Stephanie a “treater,” himself a corrector. “At our dinner table, we’ll talk about ethical considerations of our jobs, the frustrations that we have, even with similar things. Both our professions are trying to do right by people. Even though the joke is we should be on opposing sides we find that we have a lot in common.”

Their commonality began when that mutual friend told Mark a funny story about Stephanie. Mark expressed interest in meeting her, but the friend said he didn’t think they’d get along. “Let me be the judge of that,” Stephanie recalls saying, but their go-between still wouldn’t give her Mark’s phone number.

So Stephanie went to Mark’s Facebook page and sent him hers. Mark called. The conversation hasn’t stopped.

After talking for four or five hours a day every day, Stephanie told Mark she’d drive up for dinner her next day off. He said finals swamped him. “I said either we’ll go to dinner or we’ll stop talking on the phone,” she recalls. “I got the hard part, driving two-and-a-half hours each way … (so) we’re going to dinner if I drive up there.”

Mark recalls this slightly differently. Their conversations are complementary. And even when they differ, it doesn’t seem confrontational.

“When he wasn’t forthcoming with her phone number,” he says of his study group buddy, “I grabbed his phone and texted Stephanie my number. She responded to my text on his phone. Her first contact to me directly was on Facebook.”

So that July 8, Stephanie drove to Toledo for her first date with Mark. “At first I thought he was too short and then at dinner he talked too much about the wine,” she says. “But I had to remember all our good phone conversations so we went out again.

“So this is why I recommend to the young women that I try to do matchmaking with not to get hung up on things and give it time. I should also add he is taller than me anyway. I think we were on different levels on the stairs at his apartment.”

A matter of belief

They met the issue of faith head-on on their third date, says Stephanie, who went to church regularly growing up but ever less as time passed.

“Because it was very important to Mark and my religious background and faith were not at that time, we had a very short conversation in which I said I would convert,” she says.

How did her parents feel?

“They were OK with it considering how important Judaism was to their own Christian faith,” she says. “The church my family goes to highly respects Jewish people as God’s chosen people and Israel as the cradle of God, I would say, so to convert to Judaism, although not their faith, would be something that they would accept. They also met Mark and loved him immediately, which helped.”

That feeling was mutual, Mark says, suggesting his parents liked Stephanie very much from the start but perhaps even more once she converted.

Mark went to the Community Hebrew Academy of Toronto, which he calls a Canadian equivalent of the Gross Schechter Day School, and grew up Conservative, which in Canada leans more traditional. He told his parents he was seeing a wonderful girl with the last name of Pope. “There was hesitation, I think,” he recalls. When they first visited his parents’ home together, they said, “she’s amazing, Mark. But is she Jewish? The subtext was, would she convert?”

Stephanie would and did – with some regret and a bit of a learning curve.

“Giving up Christian holidays was very hard,” she says. It still is. It’s harder. “I think that having children, I’ve grown up believing I would do certain things my whole life, so I feel more compelled to do that.”

“Every marriage means give and take,” says Mark. “As it goes on, we’re finding a better balance for holidays, for traditions, and for what we’ll be teaching our kids.”

Stephanie began her conversion process in 2010, when she and Mark were among some seven couples in a conversion class at the Siegal facility in Beachwood. All those couples were “having their conversions and marriages done by Rabbi Matt,” she says. “I figured all those folks were onto something, so he was my first call, my only call.”

Apparently, the process went so well that Stephanie dreams of writing a book about becoming a “shiksa graduate” – under a pseudonym, of course. As for Mark’s “love of bagels,” she had no idea it ran so deep.

“I still get them from Toronto,” says Mark, whose grandfather was a baker. “It’s on my list of requests.”

Theirs was a Jewish wedding with variations religious and political.

“It was very important for Stephanie to have the first time I see her be when she walks down the aisle, so we signed the ketubah in front of everybody after she walked down the aisle,” Mark says. “Typically you have the ketubah signed an hour beforehand with just close family.” Also, Stephanie’s father gave her away while her mother sat in a pew; at a Jewish wedding, both parents give the bride away.

In Canada, the family sits at the head table, not the wedding party. This intercontinental couple stuck to the American practice.

Stephanie had grown up expecting bride and groom to have the first dance; in a Jewish wedding, typically the Hora launches the reception. Here, they cut the cake, moved it off to the side, “we danced, and then ‘Hava Nagila’ played and people got up for the hora,” she says.

Line dancing alternated with circle dancing. Her dad gave a prayer; his read the blessing over the challah. A groomsman toppled.

“Somebody at the ceremony fainted; it was hot and humid outside, what do you do?” recalls Eisenberg. “You stop, everybody takes a breath, we help the person get up, give the person a little something to drink, we all have a nice smile and a little laugh, then we go on. It’s an illustration of life; nothing goes perfectly and there will be times when things happen. A measure of a person is how we respond to that. We took care of it, we started back up. It was a wonderful day.”

For counselor Mark Abramowitz and Dr. Stephanie Pope, the day went beyond the wonderful. It turned two people accustomed to going their own way into a party of one.

The couple: Mark and Stephanie Abramowitz

Traditions: The couple blended beliefs and customs from Christianity and Judaism