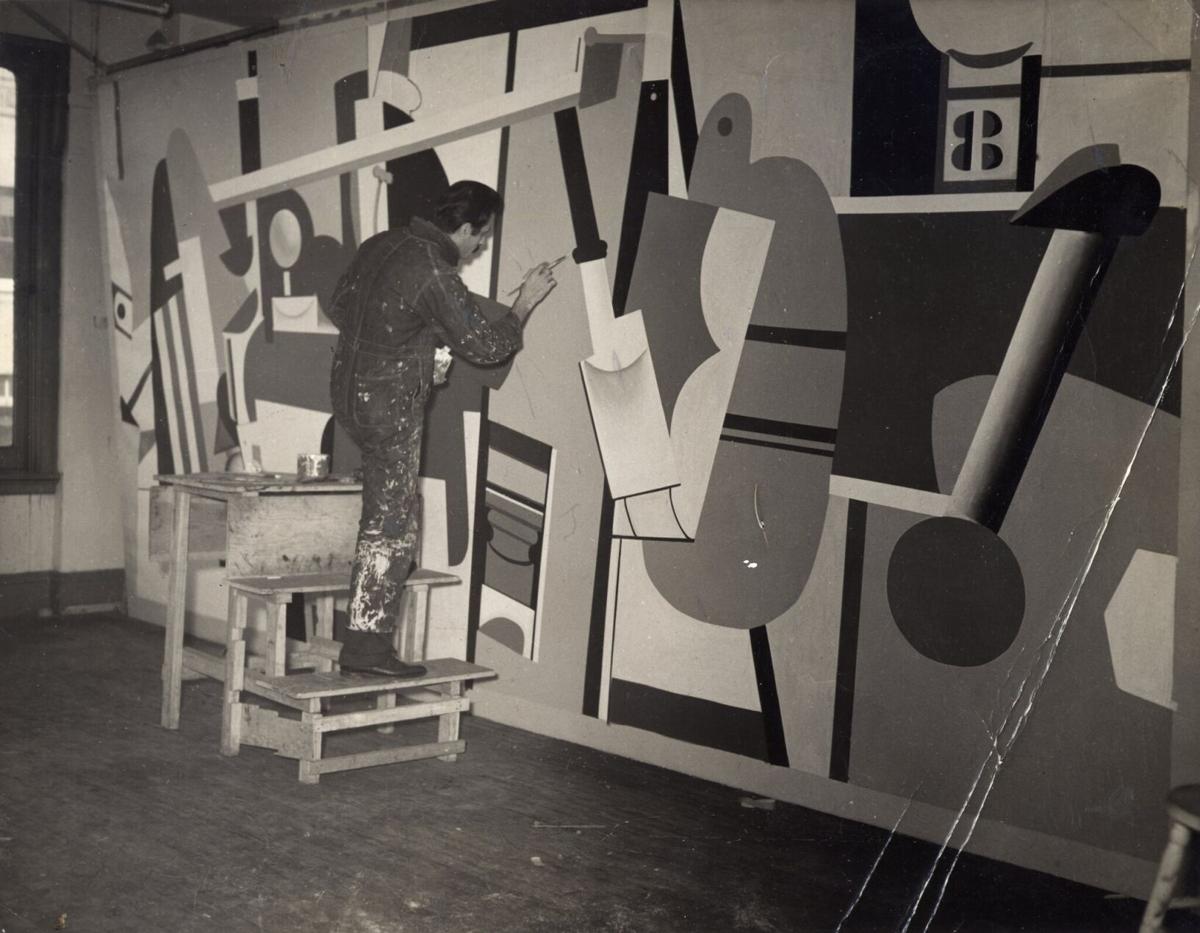 Arshile Gorky works on “Activities on the field,” his 1936 mural project for Newark Airport sponsored by the Works Progress Administration. 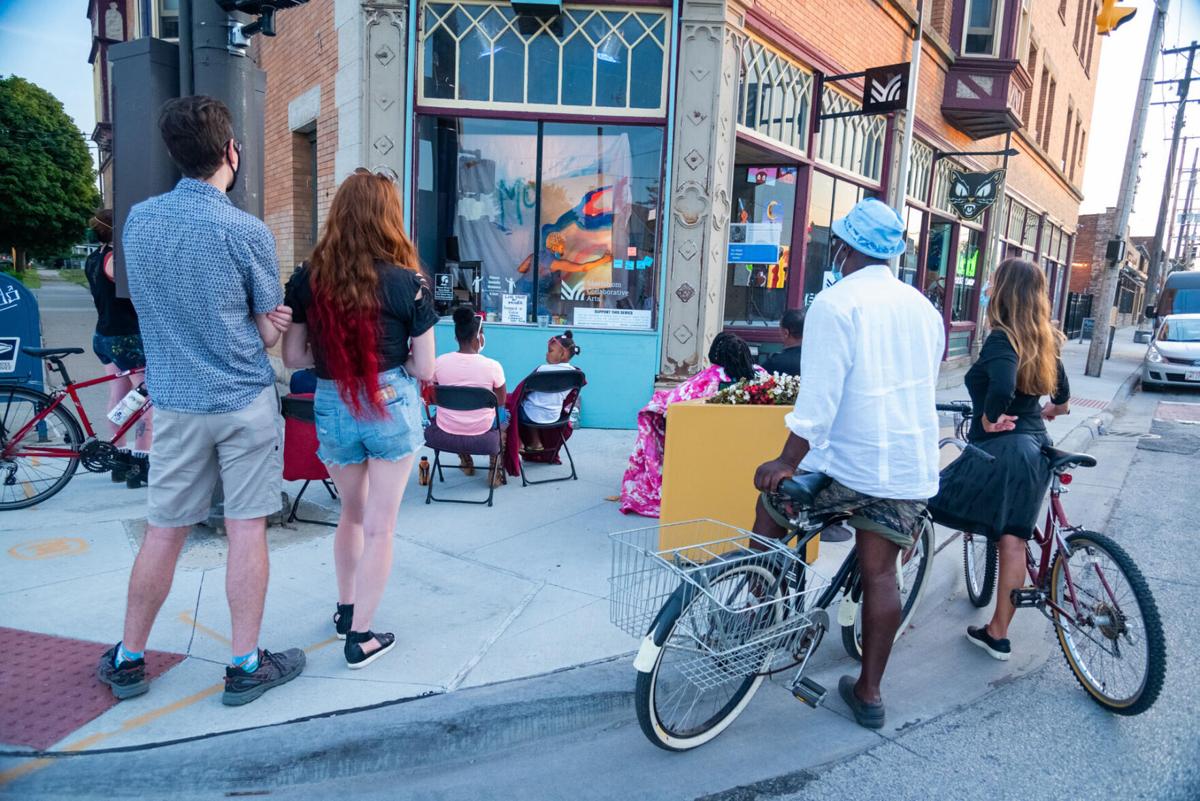 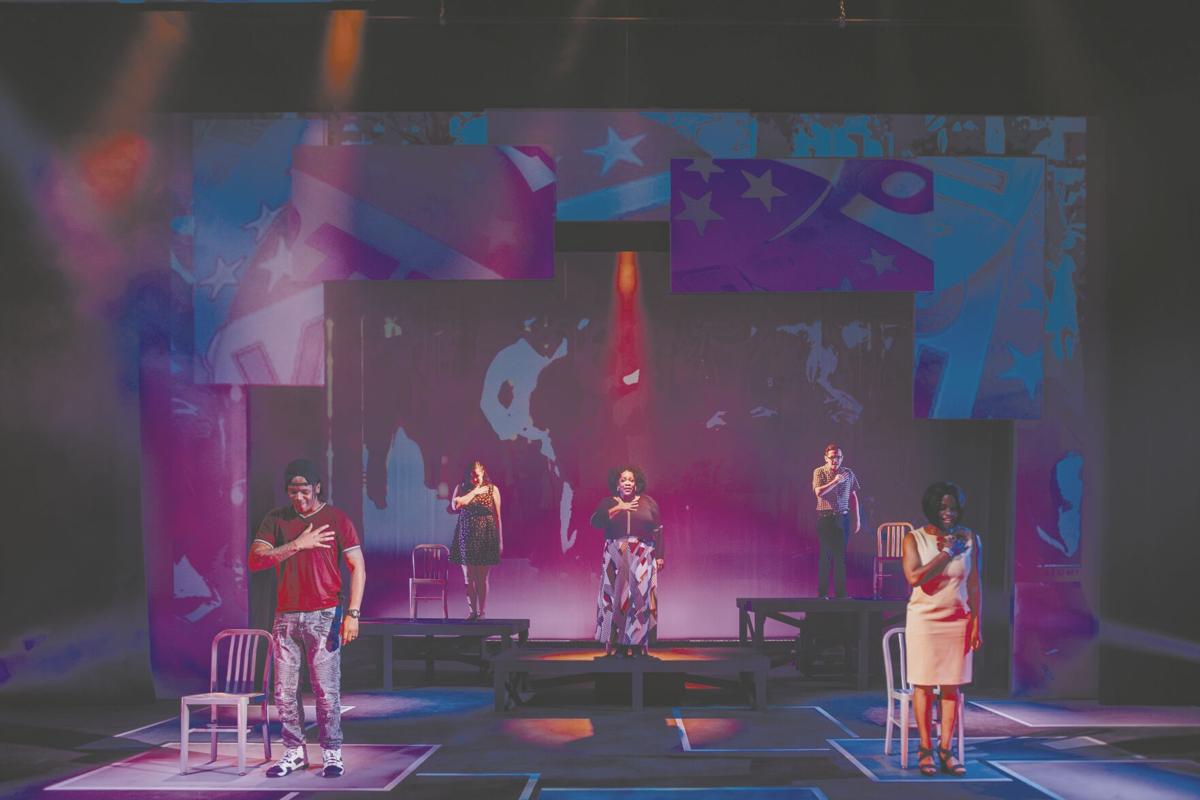 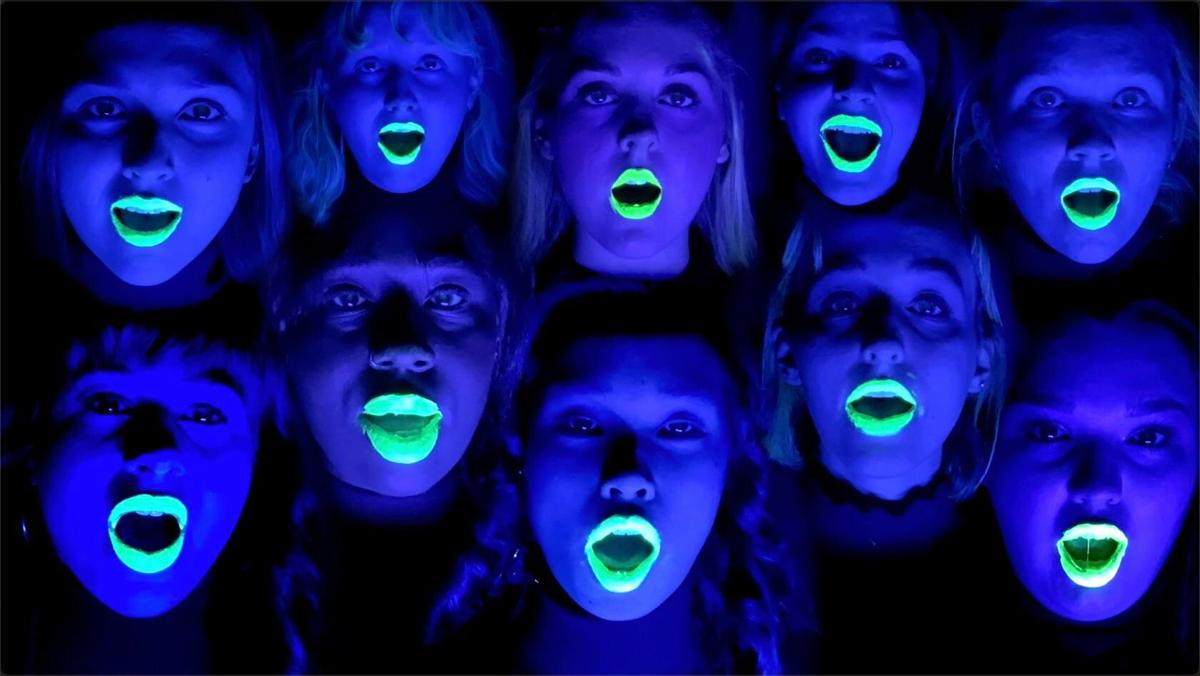 The cast of “Ghost Girls,” part of the “5 x 15 Minutes” musicals, a partnership between the Beck Center for the Arts, Baldwin Wallace University and the National Alliance for Musical Theatre. 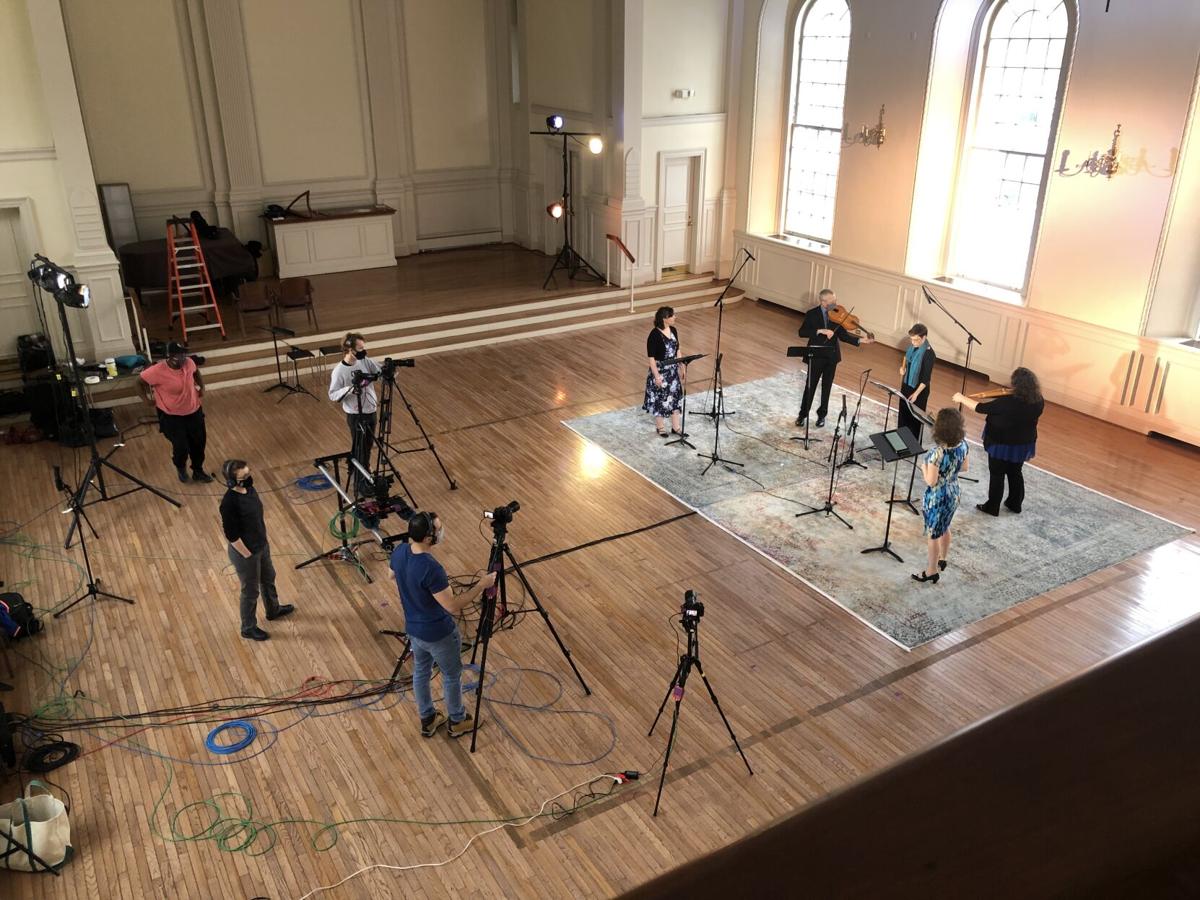 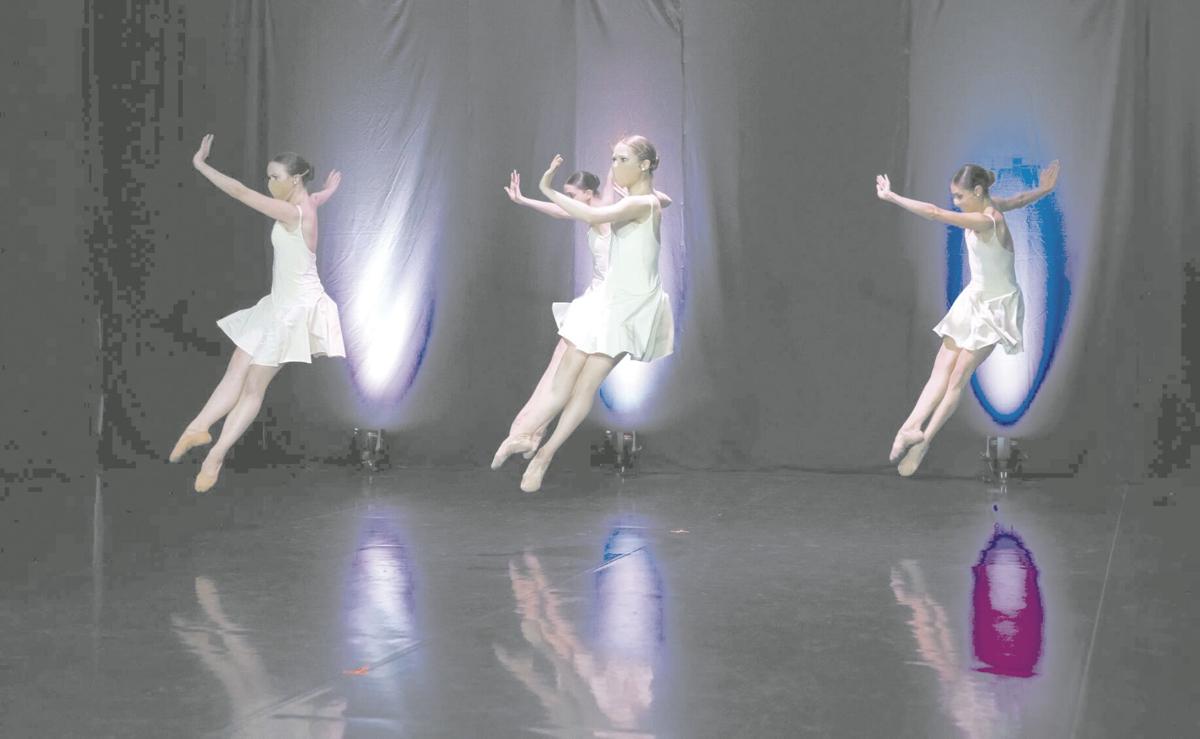 Between 1933 and 1943, during the depths of the Great Depression and into the early years of World War II, federal tax dollars employed artists and craft workers of various media and with varying levels of experience, and kept them from poverty and despair.

In addition to providing relief, the New Deal’s Federal Art Project and other government-sponsored art programs promoted American art and culture by giving more Americans access to what President Franklin D. Roosevelt decorously labeled “an abundant life.” It enabled Americans all across the country to see an original painting for the first time, attend their first professional live theater or dance production, or take their first music or drawing class. An enormous volume of public art intended for education and civic engagement – including 2,500 murals and 18,000 sculptures – was created without restriction to content or subject matter and put on display.

“Artists have been given something more precious than their daily bread,” said social critic Lewis Mumford at the time. “(They have received) the knowledge that their work has a destination in the community.” The public art of the New Deal reflected a vast array of traditions and cultures that served not only to celebrate the nation’s diversity but to reflect and build a common, collective national identity through art.

Never before or since has our government so extensively supported and sponsored the arts. Until now.

The Bureau of Economic Analysis and the National Endowment for the Arts report arts and culture contribute approximately $877.8 billion, or 4.5%, to the nation’s gross domestic product annually, according to 2017 data. Prior to the pandemic, more than 5 million wage-and-salary workers were employed in the arts and cultural sector.

In the wake of COVID-19, the arts have been devastated. Research published by the Brookings Institution reports the performing arts have been the most at risk and the hardest hit of all the creative industries. More than 52% of actors and 55% of dancers were out of work in the third quarter of last year, when the national unemployment rate was 8.5%, The New York Times reported. Since the shuttering of arts venues in March to the end of the last calendar year, it was estimated that nationwide almost 1.4 million performing and fine arts related jobs and $42.5 billion in sales have been lost. And the numbers are mounting as venues remain closed or open to sparse, socially distanced occupancy.

Broadway theaters were among the first businesses to shut down in March and according to the Actors’ Equity Association, more than 1,100 actors and managers lost work. From May 2018 to May 2019, shows across all 41 theaters garnered more than $1.83 billion in sales. But according to a report published by the Broadway League, a national organization of theater owners and show producers, only around $300 million in ticket sales were generated in 2020 before theaters were shuttered and midtown Manhattan became nearly deserted. Thousands more working touring shows that contributed $3.8 billion to the local economies of about 200 U.S. cities became unemployed.

Locally in Cuyahoga County, arts, entertainment and recreation is a $1.35 billion industry that employs more than 10,000 people, one-third of whom lost jobs due to the pandemic, media outlets reported in October. Downtown Cleveland’s Playhouse Square Foundation – a consortium of performing arts venues that attracts about 1 million visits a year – estimated a loss of about $4 million and laid off or furloughed nearly 200 employees between March 2020, when its theaters were first closed, and the end of the calendar year. Playhouse Square has canceled or postponed 680 performances, the organization reported late last year.

“Your health and safety are our top priority,” said Gina Vernaci, Playhouse Square CEO and president, in a news release in May 2020, when she announced the postponement of the KeyBank Broadway series

And, of course, local theaters, concert halls, nightclubs and arenas across the region have had thousands of live performances canceled or indefinitely postponed, leaving artists unemployed or severely underemployed. But there has been help.

The Coronavirus Aid, Relief and Economic Security Act was a $2.2 trillion economic stimulus bill signed into law last March in response to the economic fallout of the pandemic. The bill included the Paycheck Protection Program, which offered small businesses – including arts organizations – forgivable loans to help them keep their workforce employed during COVID-19.

Within 18 days of the bill’s approval, the National Endowment for the Arts was awarded almost $75 million, 40% of which was to be distributed to state and territorial arts agencies and regional arts organizations, including the Ohio Arts Council, for their funding of local programs. By law, the agency had to allocate the money by Dec. 30, 2020 which, its executive director, Donna S. Collins, said in a news release, “will go a long way in supporting the recovery and resilience of Ohio’s creative economy.”

The OAC issued 296 grant awards totaling $20 million in economic relief for the arts and culture sector. Approximately $2.66 million was set to be distributed to arts and culture nonprofits through Cuyahoga Arts & Culture, the public agency that distributes some $12 million a year in county cigarette tax revenue to cultural nonprofits in the area. An additional $1.3 million was given to Arts Cleveland, which distributed the relief funds to some 425 Cuyahoga County artists and 38 performing arts businesses, of which 23 are owned by minorities or women, local media reported.

“The CARE funds we received though the Ohio Arts Council and Cuyahoga Arts & Culture have helped survive the loss of a season plus two plays from last spring,” said Bob Taylor, executive director of Great Lakes Theater in Cleveland. “They allowed us to hold onto the reserves we strategically and rigorously built over the last decade so that we will be ready for when what’s coming next comes along.”

In December 2020, tucked into Congress’ massive, year-end $2.3 trillion relief package, was the largest public rescue of the arts in U.S. history: $15 billion in relief grants earmarked to help save the arts and entertainment industry. First crack at the money went to those venue owners who could demonstrate losses of 90% of their earned total revenue because of the COVID-19 shutdown, The Washington Post reported. Allowable expenses included equipment, rent, insurance, worker protection expenditures and mortgage payments.

The PPP was also extended, allowing many arts organizations to apply for a second forgivable loan from a pool of $284 billion. The NEA and National Endowment for the Humanities were given a budget increase of $5.2 million each ($167.5 million each in FY2021) and were tasked with distributing additional funding to nonprofit arts organizations across the country.

Most recently, the $1.9 trillion American Rescue Plan Act of 2021 passed this March. The Act provides an additional $270 million in funds to the NEA and NEH, $175 million in emergency funding for the Corporation for Public Broadcasting, an additional $7.25 billion for PPP and an additional $1.25 billion for the Shuttered Venue Operators Grant Program program. It is expected this round of funding will support about 234,000 jobs, according to the National Endowment for the Arts.

How do relief payments affect arts organizations on an individual basis? For one thing, the funding provides for sustainable staffing. For many arts organization, the first and most accessible form of assistance came in the form the forgivable loans made available through the Paycheck Protection Program. The first round of the PPP, which issued loans from March to August 2020, helped 5.2 million small businesses keep 51 million American workers employed, according to the Small Business Administration.

This past December, as many small businesses continued to struggle and the PPP was renewed, roughly 60,000 borrowers were approved for the forgivable loans during the first week of the reopening, noted the SBA. A portion of the available funds were set aside for first-time borrowers.

In Northeast Ohio, some larger organizations like downtown Great Lakes Theater did not have to lay off a single administrative or production staffer thanks to these loans.

“When we are ready to go back to work and deliver live theater – hopefully in the fall, along with our Playhouse Square partners – we will have our team in place and hit the ground running,” Taylor said.

André Gremillet, president and CEO of The Cleveland Orchestra, said, “We applied for and received a PPP loan in the amount of $5.5 million dollars, which was absolutely essential in order to be able to pay our employees – including our musicians – in 2020.”

For some smaller arts organizations with limited staffing, such as Cleveland Heights’ Ensemble Theatre, PPP loans were “a lifeline,” according to executive artistic director Celeste Cosentino.

Another impact is on programming. Karamu House, in the Fairfax neighborhood on the east side of Cleveland, and CPT were among the many local theaters to receive a grant from the OAC CARES program. But they were the only two Cleveland theaters of the 30 historically under-resourced Midwestern arts and culture organizations to receive a grant from Arts Midwest’s share of the United States Regional Arts Resilience Fund.

This first round of funding – consisting of $50,000 to $55,000 grants for each of the 30 organizations, underwritten by the Andrew W. Mellon Foundation – focused on rural communities, Indigenous communities and communities of color. Karamu is the oldest producing African American theater in the nation, and CPT is home to the Latino theater company Teatro Publico de Cleveland. Grant sources helped make possible Karamus’ original virtual theater social justice series “Freedom on Juneteenth” and facilitated CPT’s use of technology to extend its virtual reach into the community, and to take creative risks in the development of hybrid performance art that merge film with live theater.

Cleveland Public Theatre’s Raymond Bobgan said everything takes longer and requires more resources to produce art under the current circumstances. But the grants have allowed CPT in Gordon Square to “dive in” and reinvent its working model, he said.

Laura Wiegand, executive director of Les Délices, suggested grants distributed by Cuyahoga Arts & Culture and the OAC enabled the Cleveland-based chamber ensemble to think outside the box. Added the company’s artistic director, Debra Nagy, “We emerged from the pandemic as providers of virtual interactive programming and pivoted from audio to audio/video recording for later distribution. It changed our model of creativity.”

The same goes for Verb Ballets in Shaker Heights, which was forced to close its doors last March. According to producing artistic director Margaret Carlson, “We could not have continued without relief funding,” which not only reopened the doors six weeks later by providing payroll for the company’s 14 dancers and six staff, but it allowed Verb Ballets to invest in the equipment necessary to transition a rehearsal studio into a recording studio, and purchase the technology necessary to deliver performances virtually.

“Doing so,” said Carlson, “has significantly expanded the company’s audience nationally and internationally.”