Daniel A. Carlson, 35, of Highland Heights submitted his resignation June 2. The school board voted to accept it June 8, Kelly wrote.

Carlson had an initial felony appearance June 9 in Lyndhurst Municipal Court. Judge Larry Allen set bond at $20,000 cash or surety and the case was bound over to Cuyahoga County Court of Common Pleas for further proceedings.

As of June 9, Carlson was being held at the Highland Heights Police Department. If he does post bond, Carlson is to have no contact with the alleged victim or her family whether by telephone, fax, email, voicemail, regular mail, social network, delivery, or otherwise, and shall not be within 500 feet of her, her residence, place of work/business, or school. In addition, he is not to have any access to a computer and is to be placed on GPS monitoring. There was no indication of a pleading in notes on the court’s docket.

Carlon’s attorney is Robert B. Botnick of The Botnick Law Firm LLC in Shaker Heights.

Carlson is a former Mayfield Heights City School District board member as well, having served from 2010 to 2013. He is also a former track and field coach at University School in Hunting Valley.

“Mayfield administration notified the police immediately. Highland Heights Police began conducting an investigation. Based on the information I have received, this incident will likely involve multiple, female Mayfield students, has occurred over several months and was limited to internet activity,” Kelly wrote. 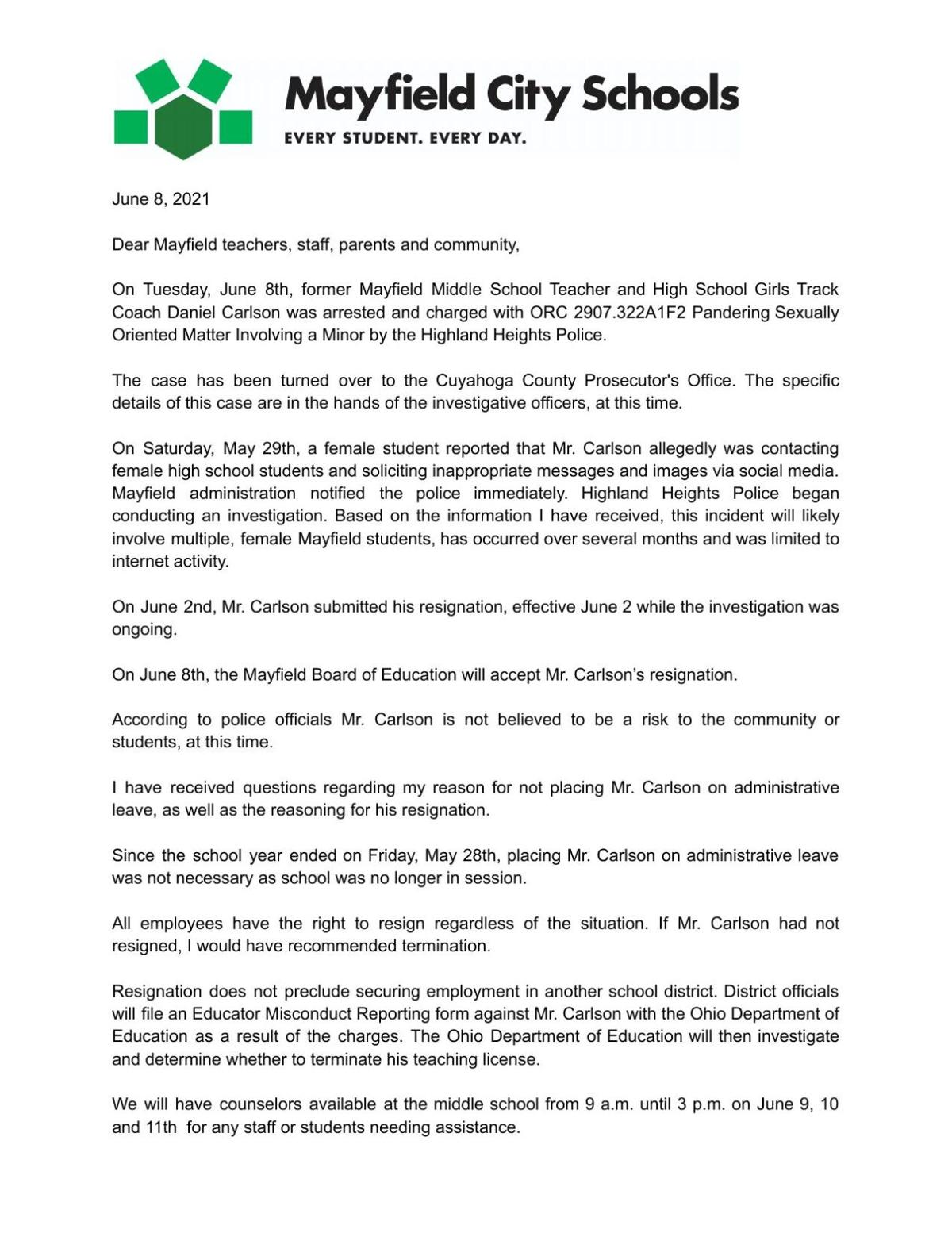 Kelly wrote that police do not believe Carlson to be “a risk to the community or students, at this time.”

Kelly wrote he has received multiple questions about not placing Carlson on administrative leave.

“Since the school year ended on Friday, May 28th, placing Mr. Carlson on administrative leave was not necessary as school was no longer in session,” he wrote. “All employees have the right to resign regardless of the situation. If Mr. Carlson had not resigned, I would have recommended termination.

Kelly said counselors would be available at the middle school from 9 a.m. until 3 p.m. June 11 for any staff or students needing assistance.

“My communications regarding this matter are in cooperation with the Highland Heights Police Department and school district legal counsel,” Kelly wrote. “School officials continue to reinforce that all threats by students, staff and community are taken seriously and are thoroughly and immediately investigated by police and school administration.”

This is a developing story. Visit cjn.org for updates.

Beachwood neighborhood delivers for 'best mailman in the whole world'