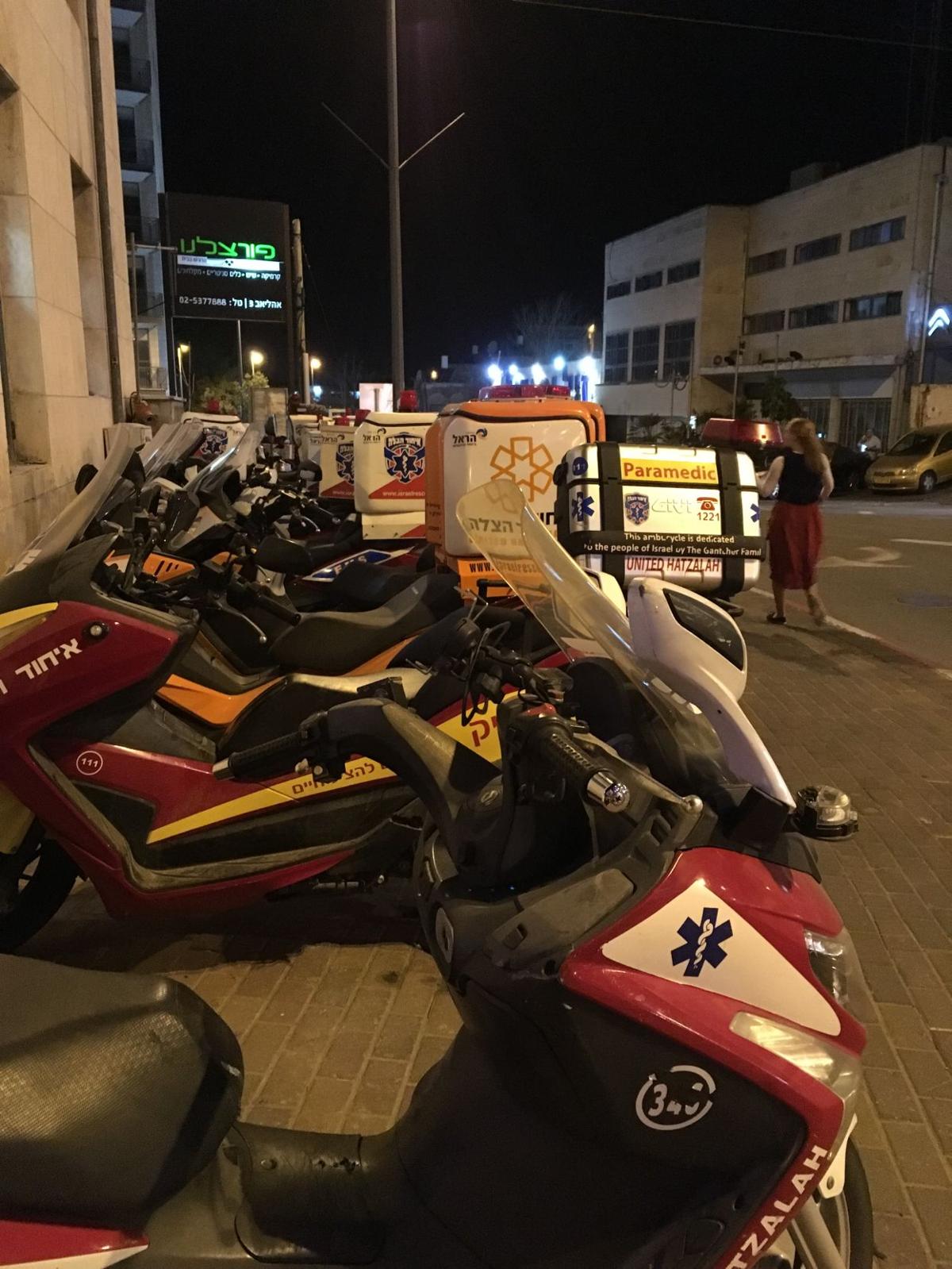 Hatzalah motorcycles parked near the Central Bus Station are ready for any emergency.

Last May in Jerusalem, I attended the Yom Hazikaron, or Remembrance Day, ceremony at the National Building, which houses the Jewish Agency for Israel, Keren Kayemet L’Yisrael and the Israel offices of the Jewish Federations of North America and its members.

In addition to moving speeches by outgoing Jewish Agency chair Natan Sharansky and others, the program included a beautiful song whose melody and words have remained with me since that day. The song, by Yonatan Razel, is called “Katonti” (“I am not worthy”). The words come from parashah Vayishlach.

The scene: Jacob is heading to meet Esau, whom he has not seen since Jacob fled their childhood home after manipulating the birthright from Isaac. Jacob is frightened and anxious and, as a security measure, he divides the people and flocks traveling with him. He then says to God, “Katonti (I am not worthy) of all the kindnesses, that in truth You made from Your work.” Jacob tells God he crossed the Jordan River alone, but now has become two camps, and he pleads that God will deliver him from the hand of his brother.

Throughout the weeks since the Pittsburgh shooting, I have been thinking about this song and about security in the United States and in Israel, two major Jewish population centers. The additional policemen, both uniformed and in plainclothes that we have been seeing each Shabbat at our Cleveland synagogue are both alarming and comforting.

Often, I am asked, “Aren’t you concerned about your safety in Jerusalem?” I answer, “No,” for in truth, the random, often senseless shootings here in the U.S. are scarier to me than terrorists in Israel. The two, large schools in our Jerusalem neighborhood are surrounded by gates and there is a guard at the entrance. Our bags are searched as we enter malls. Security is part of life. People are alert and I am sure there are hidden others “on duty” and watching.

One day in winter 2017 on our way home from the Ulpan on the bus, we saw one Hatzalah motorcycle after another heading in the same direction as we were traveling. Hearing siren after siren, we knew something had happened. It took several minutes before we learned of the attack on a bus of soldiers at the Tayelet. Israel’s ever-ready first-responders were at the scene well before anyone knew of the event.

First-responders are becoming more and more important in the U.S. While there is terrorism in Israel, with knives and fire-bearing kites, there is now terrorism of a different sort in the U.S. schools, synagogues, churches, malls and bars – all are vulnerable to the attack of a hate-filled or thrill-seeking terrorist.

In Israel, as soon as people hear about an attack, they are on their phones, checking in with family and friends, making sure loved ones are safe. Just after the Pittsburgh attack hit the news, my friend, Zvia, who lives in Rehovot, Israel, in typical Israeli style, texted me to make sure I was OK and to share her concern. From Zvia, I learned just as there have been American Jews who traveled to Israel in a show of solidarity after a sudden tragic attack, Israeli Jews were on their way to comfort mourners in Pittsburgh.

We were back in Jerusalem for Chanukah, lighting our outdoor Chanukiah purchased last year in the Old City, and recognizing the miracles – the peaceful reunion of brothers Jacob and Esau, the quick-acting first-responders in the U.S. and Israel, and the enduring Jewish strength, resilience and solidarity in insecure situations no matter where we may be.